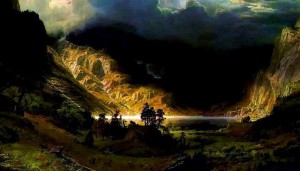 American romanticism was formed in the 19th century, as a kind of paradigm of philosophical, literary and scientific views. This unique phenomenon of world culture had a tremendous impact on the aesthetical, ethical, political and philosophical ideas of the second half of the 19th century.

Philosophical views of romantic thinkers most fruitful and clearly were expressed in the works of Ralph Waldo Emerson: “Nature”, 1836, “Essays: First Series”, 1841; “Essays: Second Series”, 1844, “Representative Men”, 1850, “The Conduct of Life”, 1860. Particular influence on American philosophy had Henry David Thoreau with such works: “A Week on the Concord and Merrimack Rivers”, 1849, “Walden; or, Life in the Woods”, 1854, “Journal of Henry David Thoreau”, 1906.

These philosophical treatises, dialogues, essays, or individual letters and other works are relating to philosophical problems and ideas. Despite the variety of philosophical topics, the books of the American philosophers of Romanticism are difficult to identify as a purely philosophical. All because of their philosophical ideas are combined with the ideas of psychology and mysticism. Despite the young age of the country, the United States experienced two bloody wars that affected the intellectuals and their speculative thought.

Thinkers, philosophers felt the need for a romantic view of human nature. The American Enlightenment, proclaimed the mind, intelligence initial concepts of the new world view that was a reaction to the mainstream in the past rigorist religious beliefs of the Puritans. Being disappointed in Puritanism with its harsh ethics and poor aesthetics, American felt the inadequacy of the sole rule of reason without metaphysical foundation.

Philosophical views of Ralph Waldo Emerson and Henry David Thoreau, the most famous representatives of American Romanticism, contain ontological views, mystical and religious and epistemological ideas. It is also known that Ralph Waldo Emerson was acquainted with the philosophical texts such as the “Bhagavad Gita”, “Upanishads”, Plato’s dialogues, the works of Plotinus, as Henry David Topo was acquainted with the Indian and Chinese philosophy. In Walt Whitman’s “Leaves of Grass”, 1855-1891, author exalts the proximity of a person with Nature, which does not seem to him as a sin, but rather beautiful: “I celebrate myself, and sing myself / And what I take on you will take on, / Every atom belonging to me belongs to you / I’m without a care and I invite my soul, / I release this pressure to observe the grass grow with my soul” [Whitman W. Walt Whitman’s Leaves of Grass [text] / Walt Whitman. – Oxford : University Press, 2005. – 184 p.].

Ukrainian researchers can read the translation of Walt Whitman’s philosophical poetry, performed by the publishing house Dnipro in 1984. The writer Nathaniel Hawthorne was passionate for Ralph Waldo Emerson`s transcendentalism, and even in 1841 he joined the commune, which sought to combine physical labor with spiritual culture. In Herman Melville’s “Moby Dick” on the pages of the novel, which he dedicated to Nathaniel Hawthorne, author expressed his interest in the deep forces of nature.

This novel is imbued with many lyrical digressions, biblical imagery and multi-layered symbolism. Also, Nathaniel Hawthorne demonstrates the decline of Puritan views in the story “Young Goodman Brown”, 1835. This story is about the Salem settlement in New England. This story is similar to the parable, a young man by the name of Brown leaves his wife at night to meet up in the woods with a demonic creature. In the forest creature seduces a young man, but the man hesitates, thinking of his wife.

Ironically, Brown greets villagers, who hastened to the night Sabbath, among which was his lover. Story ends with the fact that Brown woke up in the morning, and he couldn’t determine whether all was really, or only a dream, but until his death he suspects others in black, mys tical matters [Hawthorne N. Young Goodman Brown [text] / Nathaniel Hawthorne // Color of Evil. – Ed. By David Hartwell. Transl. A. Yaremchuk. – Kharkiv: Book Club “Family Leisure Club”, 2016. – PP. 209 – 224].

In his novel Nathaniel Hawthorne describes the life of the first colonists of New England, their feeling of holiness, austerity, hardness morality. However, along with this thinker sees the tragic struggle between the rectilinear requirements of abstract moral precepts and nature, overwhelming human desire to achieve their own nature. Summarizing the permanent orientation of the philosophical ideas of the American Romanticism, it is necessary to pay attention to the idiosyncratic fluctuations between religion and mysticism, science and literature, politics and austerity.

Created by Ya. A. Sobolevsky.