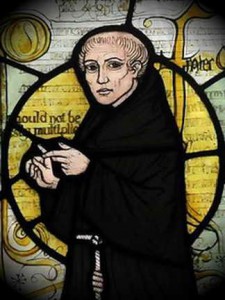 In the first half of the XIV century William of Ockham took part in debates of the Church and countries of Western Europe. In 1324 he was summoned to the court of papal curia in Avignon to answer the question about correspondence of his theological and philosophical works concerning the question of faith.

Here charges of heresy come up. Pope John XXII demands explanations, having a list of suspicious quotation by Ockham, which was made by Oxford University chancellor. After three years’ work of the commission appointed by the Pope, 7 points were announced heretical, 37 – false and 4 were called dangerous.

By that time William of Ockham hadn’t written anything on political issues. After that an “Invincible Doctor”, as Ockham was called, takes up political philosophy. Dialogus I and II were written in Avignon. Later “Eight Questions on the Power of the Pope” (1340- 41), “The Work of Ninety Days” (1332-34), “Letter to the Friars Mino” (1334), “Short Discourse” (1341-42) were created when Ockham was under the protection of the Emperor Ludwig of Bavaria in Munich. Such experience led him to two conclusions: firstly, the philosophers were unable to define the limits of natural mind; secondly, papacy can’t perceive the limits of its power.

Exactly such thoughts found their reflection in his political philosophy. Ockham believes that it is important to define strict limits of power both inside the Church and the state. So he tries to set the limits of papal power. We know that the Pope was the highest authority, who resolves the questions of the truth of faith. But the Pope may be a heretic as well. Moreover, the post can’t secure the Pope against mistakes and sins and also from heresy. The Pope can be sinful like any other ordinary person.

But the Pope, having such post, sins harder, more seriously and destructively than any other Christian. How to behave in such situation? Who will decide whether the Pope has become a heretic? Ockham reckons that there should be a theological expert appraisal. Because the Pope himself can’t resolve 59 this question. Under a theological expert appraisal the philosopher means professional university theologians. Actually, Ockham advocates a transfer of power from the Church to Universities.

He tries to create a new church structure which is above the Pope, but officially he didn’t want to recognize that. Professional theologians are University lecturers (they could not hold church posts). Thus, a theological expert appraisal is: firstly – professionals and secondly these professionals could resolve theological questions in public. Thirdly, the Pope didn’t have a right to appoint masters at Universities (Universities had their own autonomy), they were independent of the Pope.

A theological expert appraisal is very important as it broadens freedom of an individual and sets a limit on the Pope’s power. It gives an individual a possibility to feel freedom inside the Church. Because not priesthood has to have the supreme authority over the Church activity, but knowledge, Ockham thinks. Theological scholarship gives a high degree of freedom against any coercive power, both state and church.

It gives a Christian a chance to defend himself from despotic power of church authority. The task of the Church, from William of Ockham’s point of view, is in preserving rights and liberties via knowledge. Which form of church rule is the best? Ironically, resolving this question, Ockham turns to Aristotle’s thoughts, especially to his political philosophy.

Thus, the actual substitution of Christian doctrine takes place. The Pope transforms into God. It is interesting that on the one hand William of Ockham opposes plenitudo potestatis, and on the other hand he even makes an argument for the support of plenitudo potestatis. The more developed society, the more perfect the form of submission of the members of this society. Therefore, slavery is the most perfect form of submission from Ockham’s point of view. So, the highest order requires a single perfect master.

It must be the Pope, believing Christians must be slaves. But Ockham has an argument against plenitudo potestatis. Ockham again holds to Aristotle’s thoughts. For Great Stageira the best form of rule exists for the common benefit, and not for the personal benefit of a ruler. If all benefits were for a ruler, it would be tyranny. But before that we wrote that plenitudo potestatis is slavery.

Thus, plenitudo potestatis isn’t the best form of rule. It doesn’t serve the common benefit. Therefore plenitudo potestatis can’t be the best form of church rule. But for William of Ockham the Church is the best social system. What about the subjects, then? Ockham thinks they should be treated as equal to the Pope. Such rule will be better than to rule slaves. So, the Church power doesn’t have to treat Christians like slaves.

Plenitudo potestatis can’t be the best form of church rule. 60 What is the task of the Church, then? The Church has to serve for common benefit, protecting freedom of every Christian. And plenitudo potestatis is aimed at enslavement of Christians. Such form of the Pope’s church rule eventually leads to tyranny. As Christians strive for perfection following the commandment of Christ, the best form of church rule has to give the subjects the utmost possible extent of freedom.

Ockham suggests replacing the Pope’s power (plenitudo potestatis) with power of aristocracy. The latter are a small number of patriarchs. In this case Christians have a right to change church rule. Because papal power is of human origin and that is why it has a lot of defects. If the purpose of church rule is the common benefit and monarchy of the Pope doesn’t serve the common benefit any longer, Christians can freely change monarchical church rule to aristocratic one. That is, for Ockham freedom of Christians is important.

If Christians under papal rule turned into the Pope’s slaves, they have a right to change the form of rule. Instead of plenitudo potestatis the philosopher proclaims church aristocracy that must protect freedom of every Christian. It is clear, that the Pope could hardly have liked such thoughts of William of Ockham. In that way the Pope would be controlled and lose his individual power.

What does Ockham say about the best secular form of rule? Which relations should be established between the Church and the state? Can the Church claim absolute power? In Dialogues III Ockham thinks that monarchy is the best form of secular rule. Interestingly, the philosopher thinks that a ruler doesn’t have to obey the laws which he himself has passed. A state is an absolutely legal association of people after the Fall. The main function of the rule is to avoid violence. The earthly peace has to be made in the state by restraining evil. And any way to achieve this goal will be acceptable for the Emperor.

Because only the Emperor is able to cope with this task via individual power. From the philosopher’s point of view it is impossible to achieve a high extent of freedom in political life. It is possible to achieve freedom only by refusing to be a citizen of the state and using its protection. For reasons of Ockham it follows that the Church and the state have their own rights and freedoms. The state and the Church are separated: a secular state follows the positive law and the Church follows the gospel one.

A state governs people-citizens, and the Church governs believing Christians. The Pope is free from the coercive power of the Emperor and laymen until he falls into heresy. The Emperor, in turn, is free from coercive power of the Pope and the Church, until he becomes a heretic. If he becomes a heretic, he automatically becomes incapable. In his political philosophy Ockham opposes relations between the Church and the state.

Because the Church and the state have different tasks. A Christian can renounce to be a citizen of a state but he cannot but belong to the Church. Ockham was a great and original political philosopher. His political views became an important stage in the development of the political thought of the Middle Ages. The time came when complex power of the Pope had to be limited. At last a clear division of tasks and responsibilities between the Church 61 and the state was proclaimed by William of Ockham’s mouth.

Thus, Ockham is made a significant contribution to the preparation of a typical for Modern history political thought. Naturally, that the author’s position of Ockham in resolving political issues is specific and far from being perfect. But we can see a progress in resolving political questions in works by Marsilius of Padua, an Italian philosopher and a contemporary of William of Ockham.