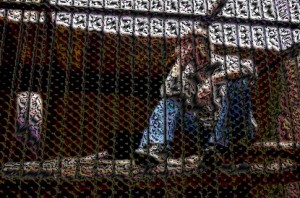 Nowadays the problem of imprisonment for life is very popular. The reason of that is because society has become more violent. Watching news, we can usually hear, that “Today was imprisoned for life a person”. But often people could be wrongly imprisoned. This can happen because of the bribe, either through deliberate label. However, question is “How to survive in such cruel prison conditions?” This is what this article about.

Life imprisonment. What is it? When is it used? How to stay a human being, if it happened to you?

I think there are not so many people, who have thought about it. However, the category of people, who asked themselves this question, exists. And there is nothing strange in that. First, let’s figure out, what is life imprisonment? Life imprisonment is a kind of punishment, what involves deprivation of liberty of the person (or group) for a period from sentencing until his (their) death.

When is life imprisonment used? Usually, this kind of punishment used in the murder. However, in some countries life imprisonment can be used in high treason, rape, war, various actions with drugs, human trafficking, terrorism etc. How can people, who had made this different in nature crimes, live in one cell? How can they walk the common corridor, eat in common canteen at the same table, spend time together in the so-called walk? As far as we know, there are different attitude for prisoners, who goes in jail with the different accusation articles.

Thus, the person, who has committed rape, has no respect from the cellmates. Because of this commit the prisoner can have cruel beaten or even worse. However, if the person has started to fight with the policeman during arrest, this person can have affection from cellmates.

Also, there are prisons abroad, in which person, who served term, can stay there for undetermined time in case court decided, that this person is a threat to society. Certainly, there is nothing worse, than hear that you not only won’t go out of prison, but maybe will stay there forever. Maybe that is why a lot of prisoners are ready to try to escape from a jail.

As we can hear from a lot of those, who decided to escape, that they were ruled by credo: “If they won’t let me out, I will go out by myself, I have nothing to lose!” They can be so sure in their power and in the successful end of their escape, that they can share all their things with cellmates. Also, a lot of those, who decided to escape, make an agreement, that if they will be caught, they will not surrender alive. The reason of that is, after they will come back to the prison, they will have much harder life, compared to what they had before.

In the race for a freedom prisoners can make very risky things. For example, they can to climb over the barbed wire, which is surrounded the entire area with prisoners, to jump from 9 meters high, to involve their relatives in plan of escape, to drink only plan juice and eat less to be able to climb through narrow holes. But are all of these methods effective in reaching the goal? Isn’t it better to live humble in jail, instead of living in constant fear, that you will be caught and be in hiding all the time?

There are many people who think that it’s better to live humble in a prison instead of trying to escape. The arguments of that is that they have place to sleep, what to eat each day, could work and earn money because of a good behavior. Also there are a lot of volunteers, who give books for prisons, lead religious service to the faithful. A lot of people in jails are rethinking their doings, their life and trying to live rest of their life with dignity.

They have families and kids, and because of knowing there is nothing to change, they want to be closer to their relatives, to see kids, to have opportunity at least somehow teach them, hug them and just to feel their support. All of that the prisoners can do during meeting time.

According to some video files and movies I can make conclusion, that there is small percent of prisoners, who talk about if doors will be open in front of them, and they would have ticket on a bus, they just won’t move from their place. The reason of that is because prisoners get used to live in such regime. Also there is a huge percent of people, who serves their term and very often finds friends there. And the last thing is they finally start to believe in God, and even can take faith.

So as we can see, life in prison is not light enough. There are own rules and laws. Anyway all of us fill give answer instead of God. And there won’t any way to run. And no one will can save us or help. That’s why I wish all of us stay a human being in any life situations.