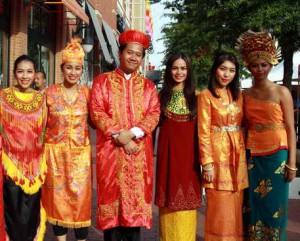 Indonesia is one of the brightest and creative powers in all of Southeast Asia. This country has a rich variety of traditions and rules, not to mention the colors of nature that surrounds this state.

Indonesia’s laws are not very different from the laws of other districts of regions. Although tradition and religion very similar. They are among the most complex and unusual.

Republic of Indonesia is a country in Southeast Asia, known for its traders and sailors that gave a significant boost to the eastern trade routes. By the middle of XI century state Mataram united under his rule all trading city. Since the XI century Java was the cultural, economic and political center of Indonesia. Since then starts flourishing country. Country widely exported spices, establishing foreign economic BC * bandages with the world.

Indonesia – extremely colorful country full of unique customs and traditions. For example, while in Indonesia, do not show the finger at someone and touch his head. Better avoid displays of affection in public, to stand up to the side of man, talking about politics, shouting and angry, blame the political regime. While visiting temples forbidden to wear shorts, shirts and wear decollete outdoor clothing; chat loudly during religious ceremonies. It is interesting that often applauding while at play, you interfering actors.

Indonesians is very sincere, nice, friendly people. Conflict situations or dissatisfaction of the islanders virtually eliminated. Respect and tolerance educated population caste system. The only trouble, which could face demanding tourist – a noise. It, however, can adapt. The main sources of noise – radio and TV at top volume.

Indonesians are vichlyvi turn to foreign visitors respectfully: “Hello, Mister” (“Hello, Mr.”).
Another unusual habit of Indonesians – touch interlocutor during conversation. This is considered a manifestation of the special courtesy. So they show how nice chat with you.

Indonesians are very tolerant of foreigners, but guests need to be very careful. In no case do not forget to remove your shoes when entering the house. If you are in Indonesia during the Muslim fasting, you are not required to follow it, but it is better not to eat in front of the Faithful – a sign of bad manners. But this rule has exceptions, if you are in the restaurant.

One unusual tradition of Indonesia is the head man is considered a holy place, and the touch of the human head is strictly prohibited. Patting the child on the head, you offend parents to death.

Transfer or accept that anything left hand while eating, this should pay particular attention strictly prohibited. Indonesians, like other peoples of the region, the left hand does not consider clean, and use it to perform the dirty work, such as Pidtyrayemo they only left hand.

Point to anything in this country, only allowed the thumb of his right hand, and then strongly pressed elbows to the body. Violation of this rule is regarded as an insult to death, it is recommended redistribute need attention this custom.

Hugs, kisses or manifestation of any other feelings in public, and here especially want to draw attention to the fact that, no matter who you hug or kiss, even if it’s your favorite, is strictly prohibited. Walking around the city, holding each other’s hands, is not recommended and may be regarded as disrespect for the environment.

In many villages in Indonesia will take you as an honored guest. It is necessary to live in the countryside to learn all the specifics on the island * yang in the shortest time. Arriving at the village, you must first go to a local leader and enlist his good pleasure to stay in the village. You will not only shelter, but also very fond yizhu.Odnak Indonesians gifts. In their sincerity offer small gifts from your home country. Any postcards, souvenirs, photos, residents of Indonesia enjoy very goods from abroad. Since they have such things can not be purchased in stores.

Despite the fact that Indonesians are very friendly and good-natured people, crime in the country is high, and the problem is that pickpockets and scammers are not the most serious danger threatening tourists. In the gangster world, Indonesia is very widespread terrorist attacks of various types, and it is more of the same acts in the resort areas. The high level of corruption in local government, and the lack of properly targeted Laws Indonesia only contribute to the development of the case.

Walking around the city, sunbathing on the beach, sitting in a taxi, even while on-site tourist may rob or steal or arbitrary it may be at the center of some local squabbles. Unfortunately, the loss of cash, credit card or purified stolen video camera, this is not the worst thing you can expect.

Clean drinking water could be better. Use it in a food purposes, not recommended. A meal prepared in street conditions, or the use of fruit purchased in the bazaars, is extremely dangerous.

Thus, we can conclude on the above, the rules and traditions of Indonesia makes the country extremely interesting study to explore the ethical and aesthetic traditions and rules.

1 thought on “Ethical and aesthetic traditions and regulations of Indonesia”