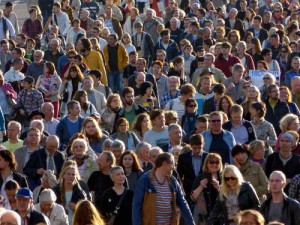 Due to rapid urbanization the relevance of the study of urban processes and social problems in the urban context has serious grounds.

Most socio-cultural and civilizational innovations arose in the cities. At the same time cities have been and remain the main platforms for the deployment of different kinds of social conflicts. Many of the problems of the current situation of urban life in varying degrees affect the problem of justice, which in recent decades rapidly “urbanized”. Overcoming injustice can be different.

We can distinguish two general approaches. 1) “Dialogic”, according to which urban injustice must be overcome through a citywide discussions with the universal dialogic perspective (e.g., V. Glazychev). 2) According to neo-Marxist point of view, the transformation of the city by ordinary citizens is possible because of “right to the city”, term first coined by Henri Lefebvre, and then developed by D. Mitchell and D. Harvey.

Using such terms, A. Lefebvre emphasizes its agonistic character and difficulty of implementation. Indeed, often such a right is only implied, in contemporary conditions it is very difficult to implement, it must be fought. Injustice leads to the growing need for revolutionary criticism of the existing provisions and for the need of “fair” transformation of urban space through revolutionary action.

A. Lefebvre, sharing a revolutionary Marxist pathos, thinks that the revolution must be urban. The society is completely urbanized and to talk about the city is to look beyond the “city”, and to grasp society as such. Urban revolution becomes essentially social. Thus, the position of the Lefebvre goes beyond the liberal egalitarian formulations, that is, to demand the return of an equal share of participation from those who used city resources to maintain their privileged positions.

He offers a more radical thing. Search for right to the city is a continuous and more radical force in the spatial restructuring, requiring the active presence in the whole urban life under capitalism. This creates a permanent challenge to what Lefebvre called “the bureaucratic society of controlled consumption”, that is, increasing influence and penetration of the state and market into all aspects of city life, including urban everyday life (quotidiennete).