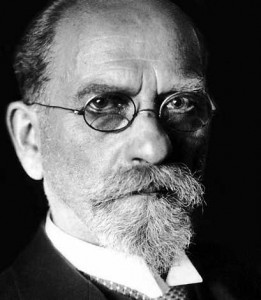 In this report we will consider the early ethics of E. Husserl and the question of the relationship of ethics and metaphysics in phenomenology. Previously phenomenology was considered as a purely epistemological project, not connecting with ethical issues. Recently the situation has changed. There have appeared studies in which phenomenology is regarded as a teaching with a strong ethical background and even as a whole practical discipline.

As for Russian studies on this topic, we are forced to state that there are very few of these studies.

In my report I would like to: 1) give a review of the early ethics of Husserl; 2) state a hypothesis about the complementarity of Husserl’s ethics and metaphysics. (1) So let me start with a review.

Thus ethics as a discipline must receive the outlines of logic as discipline. What does Husserl do for this?

First, he makes formal disciplines in his ethics: formal practice and formal axiology, as well as the phenomenology of the will.

Thirdly, like logic, ethics must have a number of competences (epistemological character) for: a) eliminating ethical relativism; b) analyzing and normative “revision” of all human practices, for this Husserl discovers ethics as a “technical doctrine” (Kunstlehre), giving it the normative character in which, in fact, denied logic.

(2) In order to state the essence of the assumption about the interdependence of the ethics and metaphysics of Husserl, we need to return to the theoretical premises stated above from the “Ideas”. In the chapter “Phenomenology of Reason” Husserl speaks of the intertwining of three kinds of mind (theoretical, axiological, practical) and the analogous structure of the noetic-noematic structures of these kinds of mind.

I would like to show that Husserl continues the tradition (Kant, etc.) of deducing morality from metaphysics. In addition, I would like to point out the difficulties that arise from such an approach: clarify the concept of parallelism (Parallelism) and the interweaveness (Verflechtung) that Husserl uses in relation to the types of intelligence he allocates.

2 thoughts on “The complementarity of Husserl’s ethics and metaphysics”