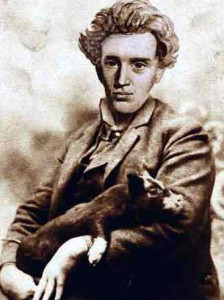 There is nothing in common in existence Kierkegaard and Hegel. According to Hegel, one can attain the Supreme through serial passage level ideas and nature. S. Kierkegaard argued that the highest stage of human development is faith. Human life as a whole is based on the rules of conduct, norms and principles, on ethics. Kierkegord throughout his life preached the irrationalism. According to this, the reasoning is never valid, because it doesn`t exist really. Thinking can be abstract and concrete. He proved the impossibility of creating such a system and science that would encompass all of reality and it is assumed in the historical process.

In the first half of the 19th century, Kierkegord denied common and objective reasons of human existence. The human mind is secondary, because man is created in the image and likeness of God. And life only have one, it is a characteristic property of “self-image”. The universal mind, and therefore cannot be the basis of human life, one can never lose if you remember about the needs and conditions of life on earth.

Real philosophy can only be “existential“, to bear personal nature. They introduced such concepts as “fear”, “despair” and “resist”. For the first time a philosopher proposed the term “existence” means “existence”. Used this concept exclusively for the person to refer to the human way of being. He argued that the only people worthy of attention in philosophy. Each person is unique, so to know it is very difficult. It can be noted that the social problem of morality is reflected in the teaching of Kierkegaard’s three spheres of existence a Single, or three stages of earthly development. The thinker has distinguished three stages of existence: aesthetic, ethical and religious.

The first stage aesthetic that is described in the work of Kierkegord’s “either – Or” and the “Three stages of life’s journey” when a man lives with new experiences, the need arises that she needs to feel and see. Kierkegaard understood the aesthetics of sensibility as characterized by eroticism, cynicism, randomness and contingency. Such a person is contained in the elements of their own emotions, feelings, passions, that is, the person is not serious to their choice and not my decision puts a significant value. The second stage is the ethical, respect for human norms of behavior. Here a person chooses for himself a position of rigor and separates good and evil, guided by the principles of duty and morality. According to the thinker, the basis of ethical conduct apply to every person and society responsibly and to have each his duty.

The third stage is the religious, the highest stage in human life, there is a direct relationship to God, without restriction, also it refers to the singular “I”. The highest stage of human development is faith, then there is a stage of existence. It cannot be isolated as unique to the mind, as man’s faith. In his work “Fear and trembling”, which was written in 1843, whose main character is a knight of faith, the biblical Avraam. Avraam became the owner of faith left in people. He was willing to kill his son Isaac, despite the fact that he asked him to spare him.

When a man strives for the impossible, that receives all, that Avraam acts in such a person, because he was among the mighty. Avraam being the obligation and responsibility before the son could put a knife in the chest, so would prove to the world the true paternal love. The basis for the first stage of life are feelings, second is understanding, third is the heart.

He created the subjective dialectic, as a means of maintaining relations of man with God. Existence for Kierkegord is a spiritual singleness, as well as the emotional-volitional character. In my opinion, people cannot be defined as thinking substance or as a natural being, man in General can not be certain. Therefore, the irrational faith of Kierkegord’s positive, because it is not subject to rational treatment, can not be rational.

Another important notion for the philosopher there is a “paradox”. He said that the human world and the divine world are not compatible with each other, and therefore refuses logical thinking and brings into the sphere of the absurd. The paradox of faith that we must admit the impossibility of carrying out his desire, to make faith absurd.

Ethics in the philosopher was antihistoricaly, and focused on morality, absolute ethics. He believed that morality has no relation to historical development. One of the existential categories of “fear” that is in unity with sin, suffering and freedom. The philosopher says that fear is stupid sense, it should not be compared with boatlift. The real fear is the fear of the guilty sinner before God, the driving force of the religious consciousness.

Thus, Kierkegoard came to the conclusion that identity is primary and society is secondary. All of this is the story of the struggle between the individual and society.