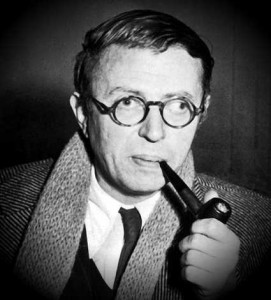 By the analysis of the metaphisic reality of the Sartrs’s “Nausea”, I would like to emphasize the following: how the apprehention of objective environment able to turn a man into an individual who is guided by his/her existention?

The choice determines the level of internal freedom of human and finally finds the fact of spiritual existence. If the choice has been made, – all consequences fall fully on the person who made that choice. If the choice wasn’t made as a result of free will of individual based on the internal grounds, but was a “side-effect” of influence of phenomenon field, – therefore, who is responsible?

What if all of the favorable opportunities of the choice which was made simply show that the phenomenon field determines the ability to make that choice? Described alternative allows to deploy the originally posed question – whether human is free in terms of the expression of his will as a Creator of his own life, or he is guided by his own existention, the drop-down in the interaction reality?

The author plays with the “reality of perceived” of his character, slips items with nonexistent the essential features, gives them a nonexistent properties, exaggerating them until they lose their names or features. Can we assume that some events do have an influence on the choice of character? Perhaps this is because the core of the personality of the character is blurred together with seeking the nullification of reality.

Based on this choice further existence is highly conditional and every being of every moment seeking to be set to zero. If the imaginary freedom of living dead is implemented whether it is from a reflexive relationship of self and self and not under the hypnotic influence of surrounding objects in the infinite reflection? Sartre uses as units of perception forming a funnel phenomenal objects giving them the ability to disrupt the emotional balance of the main character – items should not bother us because they are not living beings.

The authenticity of the person can be converted to a single manifestation of the surrounding world. Reality has a substantial capacity in which time, items, people are bogged down, which for the main character are just the outer shells, same junk as features of his own face. Sartre ties with a strong knot the problem of the meaning of life and the dualistic foundation of human existence. He does not allow his character to choose and be responsible for the choice.

All of imaginary power to dispose himself leveled by nausea, excessive existence leading to postuse if all committed to the void in whatever external form was not expressed what is the meaning of freedom. If all the value of life is not a part of life and even not the value itself, so, what is the need for responsibility? If all things are ultimately superfluous, even in their nothingness, then what alternative choice can exist?

The answer lies in the subject and a particular phenomenological approach, the experiences of the manifestations of the world. But Sartre proclaims the idea of exiting through the strata of existence and identify through genuine creative act. It is necessary to self-actualization himself in the work which acts like the impulse of the soul, feeling outside of time.

Creative result gives the opportunity to selfidentification and will become a pure existence for another person. Therefore, to gain a strong foothold in this world need acent the state of his self and the inner world to detect the ability of evident the need for revolutionary change your perception for the sake of new creative and spiritual possibilities.