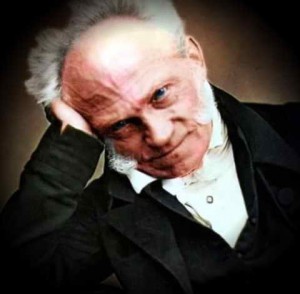 The philosophy of Arthur Schopenhauer has been historically received as inappropriately pessimistic. It seemed particularly out of place in the philosophical Zeitgeist of the early 19th century that was absorbed with the dialectical optimism of Fichte, Schelling and Hegel.

Schopenhauer’s philosophy is, for this and other reasons, often brushed aside as out of place, exaggerated and juvenile. He is then little more than the quaint philosophical antipode of Hegel, an awkward ‘frenemy’ (friend-enemy) of Romanticism and Goethe, the main philosophical inspiration of Nietzsche and, at best, would be somewhat at home in the Existentialism of Camus and Sartre.

The purpose of this presentation is to re-contextualize Schopenhauer by focusing on his notion of a ‘highest good’. Life is, according to Schopenhauer, suffering, and the human being would do well to accept this fact so that this truth might numb the will to life and facilitate the evolution towards painless nothingness.

Accordingly, Schopenhauer’s ascetic state that he cynically calls the ‘highest good’ echoes the Silenian wisdom that, for us humans, the best is not to be. I will argue that this seeming damning pessimism is actually a form of optimism if read properly.

Schopenhauer’s ascetic state of nothingness is, namely, not an admission of weakness, but a meager comfort in a world mired in suffering. Instead, by taking a look at his exact argumentation regarding, what he calls, his ‘emeritus highest good’ (i.e. saintly nothingness) it will be discovered that Schopenhauer has something quite different in mind when he reached the summit of his philosophy. Particularly helpful to clarify this point is to relate Schopenhauer’s notion of ‘nothingness’ to ways by which negative theology thinks about God as a ‘no-thing’.