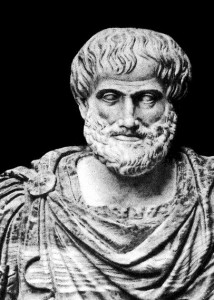 It is common place to consider Aristotle’s Metaphysics and Ethics completely independently of one another. At the same time there are a number of researchers who argue against this traditional point of view and try to find connection between Ethics and Metaphysics of Aristotle.

In my report I will describe the approach of the authors who suppose that Aristotle’s Ethics has a metaphysical foundation.

And I will show some problem consequences from this point of view. Aristotle’s “Nicomachean Ethics” starts from two fundamental assumes:

1) There is some ultimate good for man called “happiness” (eudaimonia);
2) Happiness is proper implement of “function” (ergon) of human being. Terence Irwin («The Metaphysical and Psychological Basis of Aristotle’s Ethics», 1981) insists on the necessity of additional foundation for these theses, and this additional foundation we can find in Aristotle’s “On the soul” and “Metaphysics”.

The soul is a form and substance (DA 412a19–21) because it contains a function of the fulfillment of which makes us human beings. This function is rational activity in getting good. Ed Halper («The Substance of Aristotle’s Ethics», 1995) tries to find a parallels between the “substances” mentioned in ethical works and the “substance” from “Metaphysics”. As Halper believes, Aristotle’s form is a function that unites the material parts (Met. Z.17, H.6).

The human reason functions as the form or actuality uniting the irrational part of the soul, controlling appetites and desires. Since there are two kinds of reason in the philosophy of Aristotle – theoretical and practical, both of them can be the form and actuality of the human soul. Hence there are two kinds of perfection of the human soul – sophia and phronesis. And both of these perfection represents two aspects of human nature.

Here we are faced with a dilemma: how to combine the thesis about form as the actualization of essential abilities with the existence of the two perfections of the human soul? If we keep the two forms by which realized human nature, then we will lose the united notion of human being. At the end of the “Nicomachean Ethic” Aristotle gives the palm of victory to the wisdom (sophia), i.e. to the theoretical reason as the most perfect activity. But if the main function of human beings is in perfect rational activity, how many people reach it?