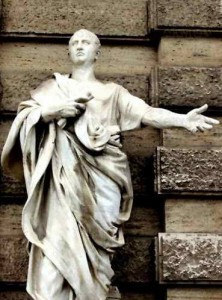 The first century BC was marked for the Roman Republic by the intensification of inside crisis processes that led to its collapse. In many ways, these processes were caused by perversion of the system of state power, where the dominant place was occupied by the tribal aristocracy.

Access to the Senate and magistrates was actually closed to truly active, gifted citizens ready to serve the Republic. On the contrary: representatives of the nobility, having guarantees of access to power, regardless of personal qualities and merits, used their position in their personal interests.

Being a “new man” among the Roman tribal elite, Cicero persistently pursued the idea of the need to revise the system of citizens’ access to state power, criticizing the current situation. In his opinion, virtuous and gifted “new people” – aristocrats of the spirit, should “inherit” the reins of government, with the help of moral-impeccable behavior and merit to the state.

However, at the end of his life, as a witness to the death of the Republic, Cicero tried to formulate the idea of deeper reforms that concerned no longer the external governance system, but the very system of values of the Roman society.

Being under the strong influence of philosophical (in particular, stoic) concepts, Cicero, in his last treatise “On Duties”, renounces the traditional Roman “code of honor” (fame, military merit, wealth, strong family) in favor of “moral beauty” (honestum), even if this adherence does not bring fame and approval. In fact, we can see emergence of an introspective, personal consciousness, with its own sense of individual responsibility, contrasting with the old principles of external evaluation of “polis”.

The ideal citizen of a new type, therefore, follows the dictates of duty, avoiding temptation of glory and wealth, struggles, above all, not for his own well-being, but for the wellbeing of fellow citizens; prefers civilian occupations to military (what is also not typical of the traditional Roman value system).

All this constitutes a “political testament” of the Republican thinker to fellow citizens. It should be noted that the ideas considered by Cicero concerning the nature of the state structure and the civil ideal had a strong influence on the subsequent European Republican movement, in particular, the Enlightenment.

In addition, the Roman civil ideal, at the inception of conceptualization of which Cicero stood, had a significant influence on moulding of civil self-consciousness on the formation of the civic consciousness of Russian society at the end of the XVIII – the first quarter of the XIX centuries.