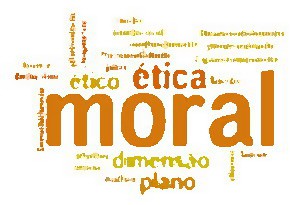 Problems and crises of moral relations at this stage of human development are very actual, because even in the early stages of development our species has dreamt about a carefree life, full of deep meaning, love and based on principles of fairness and justice.

Honesty, kindness, conscience, duty and dignity – is something that has always leads people to self-development. The behavior according these principles opens the way to moral perfection and fills the life of the individual by worthy and fair meaning. During the last centuries, we observe an extraordinary curiosity of people to moral problems and I believe it is caused by the development of technical area because it has influenced on the development of all parts of life (economical, social, political ).

I think with the growing of progress in science a man should think more about his spiritual life then we could keep morality and good nature towards others.

Man by nature cannot exist without communication, human warmth and love. But we need to ponder over man’s action for achievement this spiritual wealth. Can man think when he is hungry or frozen? Does everything depend on the wealth? Is the whole essence of spirituality in climbing the career ladder and in helping to provide their relatives to live without denying anything?

Now there is a perception that people who rise from the poor become financially secured and forget about their relatives and those who once have helped them. As for me it is the biggest problem of modern relations between individuals. But I can say that this is very subjective opinion, and it does not apply to all people. And here we have to understand whether we need slogan “One for all and all for one?” or perhaps it is better not to look at the achievements of fighters for morality and spirituality, but simply to continue making capital ourselves and family in any way, forgetting about the others?

I think a person seeks humanity in spite of everything, that’s why it’s so nice when someone helps us or supports our interests. At this stage of society we are free to choose our type of life, relationships, interests, circle of companions and friends. Freedom in this definition is identical that conscience allows us.

Sadly, but in today’s world with the next step we meet incomprehension, inability to listen, to support to communicate as educated and business people. No matter you are poor or rich, you have a higher education or not. It is important if you can do good deeds towards others or not.

In the 21 century such phenomena as ” antisocial personality disorder ” “frustration” selfishness have appeared. ” It is caused by refusing of people to cooperate and help each other. This is the result of fears that don’t let us be sincere. The modern world is cruel, it takes away almost all opportunities to be happy.

Walking to work, which brings money but does not satisfy you, to communicate with people who irritate you, to have wonderful projects, but throw them for a long time. On such ground a person becomes rigid, loses confidence in his abilities. And a problem of choice appears before individual: 1) to dive in itself, to be a gray mass; 2) to go to the aim by the heads, following the principle “all methods are good.” May be you have to concentrate, to make the titanic efforts to find an occupation which will be interesting and to improve the job you like.

At this stage of society’s development we can and must tell about global moral crises of individuals, such as violence, racism, the political division of the world. These are global problems of people and they act against mankind. The wars can appear because of a man who has power. On the basis of the experience which has been accumulated over centuries we can say that the problems and moral crises in relations between individuals were the main forces in social and ethical relations. Despite the previous historical experience the contradictions in the relationships are and will be. May be it’s good because conflict is the driving force of progress.

In general, if we consider the notion of the individual we can say it is adjacent to such definitions as “human body”, “personality”, “subjectivity”, “individuality” and “spirituality.” It means that any conflict of interests raises the problem or crisis in relations between them. Mankind and education are progressing very quickly and we can get knowledge without hindrance.

I think well- educated people can resolve conflicts of interests peacefully and without complications. But it is not always so! Very often people forget about morality, spirituality, humanism and use different methods of combating with competitors, enemies. It is very easy to do with present level of development of information technologies. You should think is person’s humiliating ethical for own benefit? A person who behaves in such way never will become highly moral individual.

Making the conclusion we can confidently say that despite of the conflicts which are between individuals, our society still tends to spirituality, humanism and every man wants love and good attitude most of all.