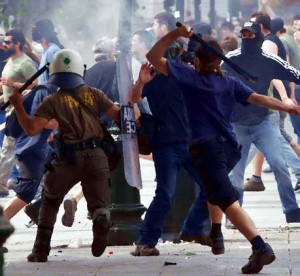 The presentation is devoted to substantiation and disclosure of the thesis that violence is an important factor of social and domestic life of a person is due to the fact that he is a thinking being, not the result of any special physical or social organizations.

The concept “violence” is used here as a generalized term for such concepts as aggression, destructiveness, cruelty.

Violence entered the theory and practice of the social disciplines, not receiving its metaphysical clarification. Marx and Nietzsche, Sorel and Freud, the Frankfurt school and Foucault – use the positive or negative aspects of violence. But they don’t see it as a metaphysical problem. Here you can talk about the traditional positivist installed on a disregard for metaphysics, with its “pseudo-questions”.

But we can talk about what this state of Affairs is due to the fact that violence is the dark side of the most intellectual ability. There is the opacity of the causes of violence for a reason. This concept, in one way or another derive violence outward, trying to justify his heterogeneity: naturalize if his (Freud, Lorenz, Girard), or to uncover its social roots (Marx, Fromm, Foucault).

Even if we argue that violence is a consequence and innate aggression of the human species, we attribute it to the phenomenal side, as people as their native element recognizes only the realm of the spirit or mind. Before you use violence, the person had to open it myself.

Violence first arises as a force acting on the other, as a bearer of free will. It is impossible to exercise violence against the creature, having free will. Violence in the stricter sense of the word as the violence solely to the man we associate with the emergence of class societies, the first States.

Yes, the man opens the violence as an ideal tool of subordination, but is only effect operating in himself and in others free will. Because we say that the source of the violence is metaphysical, and it is itself the noumenon. The realm of things in themselves there is home not only freedom, but also of violence. Here freedom ripens to the idea of self-realization.

Violence is the first form of implementation of freedom. Violence is an experiment, empirical proof of free will which man can splash out on all the regions of being (in relation to things, others, yourself).

Violence has become the Foundation of human social life, and requires careful study and control of sublimation to higher levels of manifestation of freedom as creativity. Fighting violence with negative and prohibitive forms is threatened by the manifestation of his other, more hidden and sophisticated forms.