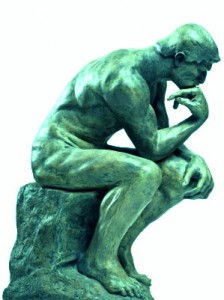 Georg Simmel and his Notion of Life

Author Rosanne Claes (MA)
Abstract: Mainly famous as a sociologist and known in the philosophy of culture, Georg Simmel wrote at the end of his days the book The View of Life, developing a metaphysical view on life. The most important element in his metaphysics is the notion of life as transcendence.

For Simmel life is always situated between two poles of determinacy and richness, the boundary and the boundless, the known and the unknown. But in this conceptual duality, life is a concrete unity: a process that at the same time is captured in determinate forms.

As transcendence, life always carries the possibility to break these forms. In my presentation I want to give an introduction to his notion of life and how life in this way can be looked at as a creative, innovative power.

Philosophy and the City

Author Vera Tylzanowski (MPhil)
Abstract: Since the end of the nineteenth century, society has increasingly urbanized. It is thus no surprise that recently the city received more attention by philosophers. However, this topic remains until today relatively unexplored in the domain of philosophy. I will begin my presentation by introducing ‘philosophy of the city’. I will sketch out what it could mean to philosophize about the city by referring to some examples in philosophical literature, such as the writings of Aristotle.

Then, I will zoom in on one particular historical period when the city received a considerable amount of (negative) attention in the work of several German thinkers: the turn of the 20th century. I will outline the concerns of these thinkers, amongst them Nietzsche, and what their negative stance towards the city implied for their philosophical thought. I will make clear that although the presence of the city in philosophical works may seem marginal or irrelevant at first sight, it in fact elucidates some key elements within philosophical thought.

Sartre’s Radical Concept of Freedom and its Plausibility

Author Nathalie Smuha (MA, Faculty of Law)
Abstract: I demonstrate that Sartre’s thoughts on consciousness lead to freedom. I then explore the plausibility of this freedom, against the concept of facticity. Sartre argues that consciousness enables us to grasp objects and confer values upon them. However, there is no meaning in objects other than that which consciousness gives them.

Moreover, Sartre suggests that facticity is not limiting our freedom, but enabling it, thus solving the paradox. However, it is not plausible that we always choose freely, and that we realize that we are choosing. The facticity of the body will for example condition the actions and choices of a tortured prisoner. There is a closing down of possibilities that are not chosen. Sartre seemingly distinguishes existential from physical freedom. But if existential freedom is just about the intention, what can it mean to us?

A Silent Repetition: Kierkegaard and Literature

Author Gurpartap Parhar (MA)
Abstract: The concept of repetition is paramount to Kierkegaard’s thought. Kierkegaard distinguishes between recollection and repetition. Recollection is a stagnant idea; it is something that stays constant. Repetition on the other hand can be described as movement.

Existence is movement. For Kierkegaard, philosophical rhetoric cannot grasp repetition’s trajectory; repetition becomes something that must be inwardly understood, it becomes something silent. This inward and unspoken truth is accentuated through dramatization. There are two layers of Repetition: first, it is a piece of literature, and secondly, it is a piece of literature written under a pseudonym.

Kierkegaard is not only doubly distancing himself from the text, but through this technique, he invites the reader to throw him/herself further into the text. Literature does not assert the existence of authenticity nor does it proclaim an objective truth or idea, but rather, it presupposes and reproduces it. Literature can be used as a means to experiment with concepts and notions of genuine movements of existence.

I will first explore Kierkegaard’s thoughts on ‘life-view’, repetition, silence, and subjective truth. I will then argue that Kierkegaard’s project not only requires dramatization to articulate itself, but that such dramatization emphasizes the role that literature plays in representing genuine modes of existing.