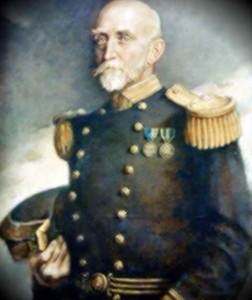 Alfred Mahan, the founder of the North American school of geopolitics, had introduced into the scientific circle such concepts as “domination at sea”, “sea power” and had developed the concept of sea power of the state for the first time. The formulated concept of A.Mahan influenced not only the development of the theory of naval art but also the development of foreign policy in many countries around the world.

In his work “The Influence of Sea Power upon History, 1660–1783 “ A.Mahan showed the influence of naval power on the historical order of events and the growth of the welfare of the nation. The basic idea of the theory of A.Mahan is Marinism, according to which the fate of mankind is solved by the expanses of the oceans, and the driving force of progress is the competition between the sea and the land forces.

Considering sea power as the most important factor in the formation of world domination, A.Mahan came to the conclusion that “the one who owns the sea possesses all” [Mahan A.T. The Influence of Sea Power on History, 1660-1783. – 1890, p.11].

A.Mahan identified six main factors which influence the naval power of the state:

The ideal condition for the geographic location can also be the presence of scattered island territories, but for this purpose, it is necessary to steer state finances and forces constantly to keep them.

2. Physical conformation including natural productivity and climate. The main condition that determines the success of the physical structure of the country is the coastline. The more difficult it is to access the border to other countries, the safer the country has, and the less the encroachment on it will be on the part of others. The availability of resources is also a decisive factor in a successful physical structure.

However, it does not mean that a country that has a lack of sufficient resources is doomed to a passive role at the international level. The author gave an example of England, that was not very rich in natural resources, but at one time it became an impetus for the development of trade, the development of new territories and the 4 establishment of ties with them.

According to A.Mahan, a continental form should also be an attribute of the physical conditions of sea power. When a sea or another water channel not only washing the country, but also dividing it into two or more parts, it contributes to two mutually opposite consequences: the emergence and establishment of the sea power of the country, or, on the other hand, leads it to a standstill.

If the state invests resources in the development of the fleet with the aim of establishing links with the rest of the territory, the development of sea power will become the consequence of it. If the state saves financial resources, there is a high risk of losing these territories in the future due to the lack of established permanently relations.

3. Size of the territory. The last factor is a natural not a human precondition for the development of naval power. Neither the number of square kilometers, but the length of the coastline and the nature of the harbour determine the safety of the country.

The country may be small in size, but has a long coastline that leaders have to defend or vice versa. It should be noted that only a proportional ratio of the size of the country with its coastline and the level of its security are reflected positively in the future international power of the state.

It should be noted that if the military power of the state can be quickly broken, then no other natural factors that provide the state with natural force will be able to restore its authority in the international space.

5. National character. In accordance with the theory of A.Mahan, the national character of people must prevail in the pursuit of a maritime commercial activity. After all, naval power is a consequence of the good possession of maritime routes, which in turn is the result of constant trade relations. At the same time, the characteristic propensity of the people to maritime trade influence the prioritization of the state authorities in favour of the development of the navy.

Thus, the propensity of the people to trade is an important factor for the development of naval and marine national character. By defeating the sea routes, the nation acquires a military character, which is a pledge in the immediate area of maritime strategic operations.

Depending on the ability of the nation to master new lands, develop them choosing the right tactics, as England had done at that time, the level of maritime power of the state and its strategic tactics will have increased. The nature of the nation as the master of new lands is as more effective, as more capable is it to build relations with its colonies, making them potential front zones. It is important not only to dispose the ability of new lands but also the tactics of identifying 5 the interests of a weaker nation with its own. Hence, it is important to direct correctly the policy, taking into account the political interests of the colonists.

A.Mahan emphasized that such a policy is based on democratic principles. At the same time, democracy can become disastrous, because it entails the activation of the role of the population in mass movements. Active mass movements are a destructive force for any state because the restructuring of the system requires significant economic resources. In contrast,

A.Mahan considered despotic power whose effectiveness is measured by force levers of influence, but its stability loses its power immediately after the changes in government. The government must support the formation and the development of the navy involving human and material resources.

Alfred Mahan has also emphasized the need for colonies that can serve as certain stations on the trade routes, as well as defense posts. N.Spykman, the follower of Mahan’s theory, called these colonies “the frontline territories” later [Nicholas Spykmen America’s Strategy in World Politics: The United States and the Balance of Power, p.20].

A.Mahan examined the influence of the colony on the example of England that had marine bases in all parts of the world, while its fleet defended them and maintained free communication between them at the same time.

The success of England as a metropolis was that it used no influence, but took into account the interests of the colonized countries, presenting them as the main system of support in the event of wars or military operations. In the final analysis, Alfred Mahan had created the theory of sea power relying on the experience of waging war with the states during 1660-1783. His ideas formed the basis of the construction of the US foreign policy line. Moreover, they are currently used as the basis for conducting international relations with European countries.

1 thought on “Theory of Sea Power by Alfred Mahan”