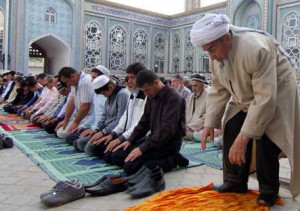 This genre of study also tends to attribute religion to separatist movement when the separatists use religious rhetoric in their struggle for freedom, such as “Muslim rebellion in the Philippines” or “Muslim separatist in Aceh”. But, is that the case? My paper argues that we might actually look them in a different way. Instead of looking at ethnicity and religion as the fault lines of a conflict, I argue for analyzing them as byproduct of a power (political or economic) conflict. Using a comparative-historical analysis, my paper examines the origin of violent conflicts in Aceh (Indonesia) and Mindanao (the Philippines).

In both cases, religious symbol is so striking that leads us to think that they are religious conflicts. My goal in this paper is to find whether religion was really the source of those conflicts. My paper concludes that religious identity, in the name of which the separatist movements fight for their cause, is recently invented. Muslim Mindanao even accepted voluntarily the US colonial rule along with other Filipino in the north.

There was also obvious unity within the Philippines in the early days of independence when Muslim and non-Muslim Filipino used to live together in peace. It was also the case in Aceh. Aceh was not only integral part of Indonesia; it was indeed the only symbol of Indonesian independence when other parts of the country were re-occupied by the Dutch. In those days, they really had a chance to be an independent state if they had had such an idea.

They fought for Indonesia and sent their fighter to help Medan instead. In both cases, the Islamic identity was reinvented and reinforced later on when political or economic problems, found no peaceful way to solve. My study is not arguing that identities, such as nationality, ethnicity, and religion, do not matter. It just argues that those are not always the case. And to solve those conflicts, economic and political analysis may be more helpful.