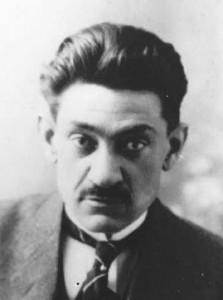 Dmitry Dontsov was a strong, freedom-loving, categorical and critical Ukrainian activist and philosopher. Nationalism was the basis of his life.

Dmitry was one of those who believe in their thoughts and actions; for whom the opposing ideas is an enemies who had to be eliminated; who unambiguously defends his position to the end. He had a radical ethical system, which was closely interwoven with his ideology of Ukrainian nationalism.

So, on this basis, he argued that Ukraine has to break away from Russia for the national self-assertion. He was a staunch opponent of socialism. Therefore, the his ethics was aimed at the same thing. According to his regulations, the governor of people should be strong, heroic, freedom-loving and for him the national idea is not something abstract, it must be regularity. This person should be an example for others. He should be based on activity, dynamism, emotionalist, bigotry, even aggression. The governor must be firm and implacable about yourself, avoid the thoughts of others, constrained by the temptations of material life, faithfully serve their ideas, understand what is a honor and duty, and seek the same from others.

Moreover, Dontsov was a supporter of idealism. He argues that freedom is the engine of the world. The highest will is the God’s will, which created the world. He identifies population into “higher” and “lower”. Higher layer – the so-called “elite” – bears the image of God’s will, and therefore should be managed lower. Every caste must know his place. At the same time, Dontsov does not singled inferiority lower castes. He argued that each layer do its goods things for humanity.

Also one of the main Dontsov’s ideas is Ukrainian traditionalism. He think, that Ukraine will become independent and distinctive only if it adhere to its traditions. Because, a person has to know well his past for build the future.

In addition, he stressed the importance of people to mankind. Every nation, in his thoughts, carries a great impact on humanity. Therefore, the Ukrainian should be useful for the world.

Dmitry also touched the issue of pedagogy. So, considering the above-said, it is easy to guess the most important traits in parenting for him. These are: the physical and emotional stamina, confidence, loyalty conviction, the pursuit of exploits, sense of honor, duty, ability to control himself and others. Education, in the opinion of Ukrainian philosopher, is not only an educator, family and society, but also the pet has to strive for self-discipline and self-education.

In my opinion, Dontsov is a very confident, too radical in their actions and demands for others. I like the idea of ??national identity in Ukraine, but I’m not a fan of his methods to achieve its goals. That is, I don’t consider that governor must be has an aggressiveness, immorality, authoritarianism. For Dontsov views, anyone who is a supporter of the idea of ??nationality, has quite brutally inspires it to others. This, in my opinion, is wrong. Because democracy is effective in dealing with people. In fact, authoritarian style would support the right idea of a lot of people, but it would not be purely their opinion. They just have to do what was ordered. But a democratic style make people free. So it’s just heard them and thought argues. However, most people will go for the outright leader.

Dontsov stressed that the idea is nothing without action. I agree with that. It is clear that the activity and confidence in our actions bring the desired result. But I don’t agree with the fact that only “elite” has true and correct ideas. In my opinion, to divide people into strata is wrong. Because a reasonable person can grow as a poor as a wealthy family and conversely. And if you’re born in a poor family – it does not mean that you have to live in obedience to another.

I agree with Dontsov’s belief that every nation affects all humanity. I believe that every person has some value to the world. Each person affects the life. And, therefore, the people as a representative of a particular nationality, certain traditions, norms and beliefs, has great influence on other nations and therefore on humanity.

Regarding Dontsov’s educational views, I somewhat support him. Because traits such as self-confidence, loyalty to his convictions, sense of honor and duty, etc. – is certainly useful features for life. But besides them, there are a number of traits that the child needs to live in society. Dmitry’s terms hasn’t features such as emotion, sensitivity, compassion, empathy and so on. This, in my opinion, should come first.

Thus, we can conclude that Dontsov was an active politician, philosopher who defended confidently Ukrainian nationalism. His Ethics was quite radical and somewhat immoral. His style is an authoritarian. His actions and thoughts should not be criticized or appealable. He is an Idealist, not materialist. And he is a patriot of his country.