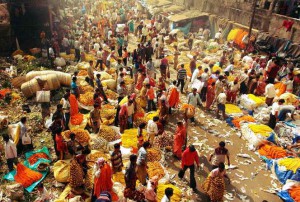 Our project will postulate that India could emerge as the paradigm for democracy. As India emerges as the representative possibility for an enduring “sovereign, socialist, secular democracy,” the country finds itself at the center of a conundrum, one that threatens the economic stability of this promising democracy.

While the achievements of the Indian economy stand as examples of market potentialities within a democracy, these achievements have also exposed India to national instability if the market cannot continue to protect itself from late capitalist decentralization. First, our paper will articulate the threats to Indian democracy as the “invisible hands” of late capitalism and the commdification of ethnicity through religious fundamentalism.

These spectral hands are threatening to suffocate the life out of the economic vitality of India. Through an economic archeology of Indian history, we will explore the results of welfare and liberal modes of late capitalism and their effects on the market. Subsequently, by examining religious fundamentalism, our paper will demonstrate that this phenomenon is a necessary device of late capitalism to alienate the citizens of India through an ethnic split that will cause a depreciation of secularization within Indian economic culture.

In conclusion, through a psychoanalytic analysis, the paper will disclose how these ghostly hands are manifesting their invisibility as ?i?ekian “irreals” within the symbolic reality of the Indian market. Our analysis will illustrate that any attempts at discovering the “kernel” of a democratic “Real” in India must come through resisting globalization by defending the market from late capitalism and religious fanaticism. In an attempt to pursue this “Real” of a secular democratic market, India must initially situate its economic self within a sustainable market independent of any US “virtual” foreign policy regarding the implementation of ‘free market.’

Secondly, it must understand religious fundamentalism as it functions symbolically within globalized late capitalism. For India to escape the invisible hands on the market, it must [re]situate itself within the democratic “void” after the western constructs of capitalism and religious intolerance have self-destructed. These ‘surreal’ fantasies of fundamentalist global capitalism and religious ideology must be withstood if India is going to structure a “sovereign, socialist, secular democratic” economy that is unconstrained by the sorcerer-like abilities to materialize these invisible hands to haunt the country in its resistance to the uni-polorizational schemes of US imperialism.