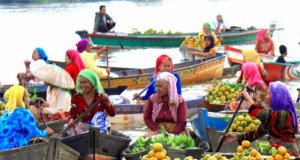 This paper examines changes of Minangkabau women’s lives in West Sumatra, Indonesia from the early twentieth century to the twenty first century. Minangkabau is an ethnic group in West Sumatra Province with matrilineal tradition. This matrilineal is a system in the maternal line would inherit ancestral lands and matrilineal titles from the grandmother to the mother and her female descendant.

Thus, the tradition provides more opportunities for women in terms of property ownership, land heritage and non-household activities. This allows women to have enough bargaining position because they have property and control over their own social identity. It is argued that bargaining position create independent women and their privileges (Agarwal, 1994). Yet, the Islamic patriarchy is also common in this society since almost 98% of population is Muslim.

The Minangkabau society accepted Islamic law as a part of their custom since the nineteenth century which the confrontation between religious leaders group (ulama) and informal leaders in Minangkabau in 1821-1837, named ‘Paderi War’ happened. The reconciliation of culture and religion incorporated both Islamic teaching and other cultural aspects.

However, the growth of the Minangkabau society with mix matrilineal and patriarchal system, economic development and Indonesian government public policies affected woman’s lives of matrilineal tradition. Women’s bargaining power had declined and they became dependent on men. By using gender relation analysis, observation and online research, this paper looks at the changes in women’s bargaining position, their autonomy and wellbeing.

The result shows that the paradoxical dual existence of matrilineal tradition and Islam patriarchy within the same society is limiting wome’s live in West Sumatra in terms of their nondomestic life. The mixture of ideas between Islamic rules and matrilineal custom affect the ways of thinking of people in Minangkabau society. For instance, the majority of Indonesian decision makers in government, religion and other formal institution have patriarchal background that produces public policy without consideration of women in public sectors.

The male views on women’s role in the Minangkabau society are combination of interpretation of matrilineal system and patriarchal mindset. It can be seen when men allow women to be active outside but the most important is complete their domestic tasks first. It intend to women have double burden and describe inequality gender relations.

The development process needs lands to construct buildings, market and house. For some financial reason, the clan in Minangkabau society sells the land and women as the owner of the land heritage lost their asset. It shows women’s live in development diminish their role in public sphere and affect their bargaining power.

Thus, it is important to preserve of women’s bargaining position and wellbeing in the Minangkabau society. It can be reached by bridging the gender gap in development program through changing government and people’s mindset who still trapped by patriarchal society idea, by raising gender awareness through training the policy makers.