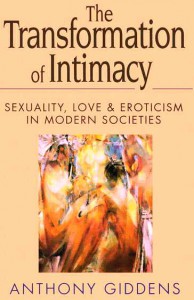 The sexual revolution happened several decades ago in the Western world and produced radical changes in the area of love, family and marriage. The famous British sociologist Anthony Giddens has developed the concept of the transformation of intimate relationships in his book “The Transformation of Intimacy. Sexuality, Love, and Eroticism in Modern Societies”.

Using the sociological research L. Rubin and A. Kinsey and M. Foucault’s philosophical treatise, the author shows how the close relationships from a social institution have been transforming to an individual’s tool of emotional fulfillment, and they are get riding of the norms and role prescriptions. They are still increasingly regulated by the needs of the individual pleasure and satisfaction.

According to A. Giddens today the close relationship are moving toward “pure relations” that is a situation in which the social attitude comes for its own sake. This relationship continues if the partners are willing to support them. Only the sexual desire of partners ensures the strength of these relationships. In addition, such relationships do not have a development scenario, since traditions and social institutions do not regulate them. The absence of an institution regulating such relations causes their fragility; this is reflected in the growth of divorces.

In addition, the probability of turning love into a kind of drug dependence is high. In this transformation of intimacy, the author identifies several key points. Firstly, there is the emergence of romantic love, which was the forerunner of relations in its pure form. Secondly, there is differentiation of reproductive and sexual behavior. Because of such changes, there has been a significant democratization of intimate relations. However, in this interpretation of marriage’s relationships, family, marital fidelity and other related concepts are obsolete and unnecessary.

Do ideals of romantic love leave the life of modern man, do family relations devalue? Giddens does not give a direct answer to this question. The concept of A. Giddens caused a lot of controversy among Russian thinkers. An important comment on A. Giddens’s book is made by E.Vovk: “should recognize the merit of Giddens at least that in this work he formulated a thesis that has been claiming for more than a decade the status of the concept: in the modern world, the sphere of intimacy undergoes a radical transformation”.

Changes in the sphere of intimacy are vividly observed through the following aspects: the increase in the number of divorces, the fall of the concept of “perversion”, lack of embarrassment in the communication of men and women, homosexuality, the tendency of universalization of reproductive behavior, commercialization of the reproductive sphere, turning pregnant into a glamorous object.

This creates new semantic fields in modern culture, in which the former value content of ethical phenomena is lost and the reproduction of new meanings and construction of the sphere of other interests begins.

4 thoughts on “Love and intimacy in Anthony Giddens concept”