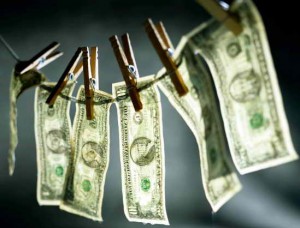 The internationalization of the global financial system and the liberalization of capital movements led to increase in illegal outflow of funds abroad, reduction of information transparency of financial flows, enhancing global financial intermediation a parallel activation of money laundering operations and in turn – reduction of tax competitiveness and investment attractiveness of the country.

Due to the clandestine nature of the money laundering, it is increasingly difficult to estimate the scale of money laundering both in the particular country and world in whole. Some estimates suggest that the amount of money laundered each year is approximately USD 2.8 trillion, but in fact amount more than four times greater than the figure generally accepted. The United Nations Office on Drugs and Crime estimates that between 2 and 5% of global GDP is laundered each year. That’s between EUR 715 billion and 1.87 trillion each year. With that in mind, the money laundering cannot be considered as an isolated threat of the economic security of each country.

Money Laundering is the multi-stage process of hiding the source and destination of illicitly-obtained money in order to legitimize it. In the context of globalization, money laundering is becoming increasingly widespread. Each year, the diversity of schemes and participants in this process will increase. Banks, insurance companies, international organizations with a branched structure are commonly used as channels to launder money.

Placement: Financial resources are deposited into financial institutions or converted into negotiable instruments for example money orders or traveler’s checks. The main aim of placement is to remove the cash from the location of acquisition in order to it concealment from the authorities and transform into other asset forms.

Layering is the most international and complex step of the money laundering cycle because funds are typically moved from one foreign account to another. Considering the difficulty in obtaining account information to identify owner, using shell corporations and offshore banks is the most frequently way of lander money on this stage

Integration: represents the conversion of illegal proceeds through financial or commercial operations. Integration creates the illusion of a legitimate source for criminally derived funds and involves techniques by legitimate businesses to increase profit and reduce tax liability. Integration include producing false invoices for goods purportedly sold by a firm in one country to a firm in another country, using funds held in a foreign bank as security for a domestic loan, commingling money in a bank accounts of companies earnings legitimate income, and purchasing property to create the illusion of legal proceeds upon disposal. 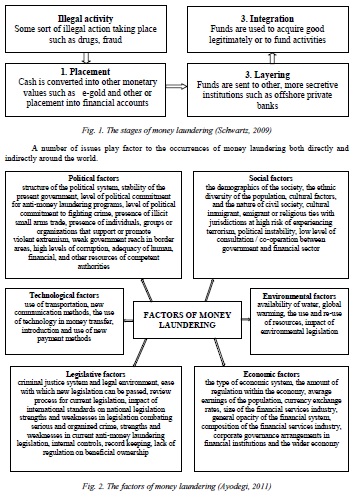 Money laundering and the financing of terrorism are global problems that not only threaten security, but also compromise the stability, transparency and efficiency of financial systems, thus undermining economic prosperity. It was considered as a threat to the integrity of financial and commodities markets, undermines fair inside and outside competition, distorts financial, material and nature resource allocation, destroys public trust and undermines the rule of law.

In analysing the impact of money laundering on developing economies, (Bartlett, 2002) specified five directions of money laundering flows in such economies. First, domestic flow, in which illicit domestic funds are laundered within the country. Second, returned flow means criminal activities occurred in the developing country, fund placed outside the country and later on integration occurred in the developing country.

The social, economic, and political consequences of money have been elaborated into such categories:

1) Reduction in foreign direct investment. Money laundering has significant international and foreign investment consequences for a country. As a rule, financial institutions that carry out money laundering operations faced with the risk of losing trust from potential investors and customers. Thus, for example, a range of money laundering operations has led to the bankruptcy of some banks particularly in the UK and Italy. In developing countries where domestic and foreign investors are considered as partners in development who stimulate the growth of the economy, a breach in confidence can be catastrophic in the long term. Moreover, as in such countries no motive to generate profits, money launderers, as a rule, invest their money in economic and commercial ventures of another countries, and accordingly, cause double damage of the country where such illicit funds are situated.

2) Deteriorating financial sector reputation. With the increasingly of money laundering activities in the economies of the developing countries, lack of information transparency and high level of corruption, developing countries having been finding it difficult to attract foreign investments which leads to economic destabilization, financial instability and, ultimately, threats to the financial security of the state. On the one hand, this reduces legitimate international opportunities and sustainable economic growth and, on the other – drawing international organized criminal groups with undesirable reputations and temporary goal. Given this, most developing countries characterized with high level of corruption, insecurity, economic and financial instability and social unrest, have persistently failed to attract adequate foreign investments to boost their economic and financial growth.

3) Growth of Corruption and bribery. Essentially, the money laundering induces to the illegal activities of the organized crime and enables criminals to expand their criminal operations (drug trafficking, arms dealings, terrorism, human trafficking, etc.) (Nicholas, 2003). In recent times, organized crime have become major threats to political stability and security, of many developing countries.

Over the years, criminal activities have become more and more international and expansive in operation and the financial aspects of the criminal activities have become more complex as a result of the swift technological advancement coupled with the globalization of the financial industry. As such, the global financial services, more than any other sector, has remain vulnerable to the attributes of and practices of money laundering. On the economic and financial front of the society, money laundering, in effect, impairs and erodes the financial structures which are very vital to economic growth and financial stability of any nation (Buscaglia, 2003).

4) Lower public sector revenues. In essence, the phenomenon of money laundering, together with other economic and financial crimes, reduces government tax revenue. Maiendra Moodley (Moodley, 2008) in her article stated that money laundering and its predicate offences are factors that contribute to the tax gap, as these activities decrease the amount of tax collected. These businesses and individuals would then need to launder the income that they received, and/or hoard this income to avoid being detected by. As a result, government revenue was reduced due to tax evasion, therefore impeding service delivery.

5) Threatens privatization. Lately, in developing countries, the operations of privatization, with the aim of economic growth, attracts money launderers and criminals. Тhe main reason is ‘legitimacy’ that a money launderer is able to acquire by purchasing into a previous government corporation and/or by being linked to the high volume of transactions. As a result, government corporations are popular instrument for laundering money (Celarier, 1997).

Conclusions. In modern conditions, the problem of money laundering is relevant and requires the unification of efforts of the world community for its solution both at the level of the country and in the whole world. A significant variety of illegal operations and instrument’s of their implementation greatly complicates their identification and evaluation process. Thus, the analysis and elimination of the main factors of money laundering, the identification of potential participants of this process, will lead to a reduction of potential threats to the country’s economic development and its financial security, and will increase the investment attractiveness and competitiveness of the country.

Created by PhD Tiutiunyk I. V.

3 thoughts on “Money laundering: a threat to the country’s economic security and global financial stability”