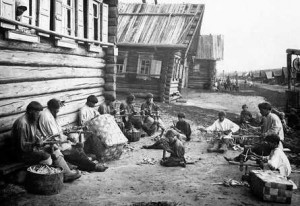 The end of the nineteenth century and the beginning of the twentieth century was a time of social upheaval in Europe and in Russia, which, with a need, required not only philosophical reflections, but also social and sometimes personal choices, which could not but affect the definition of the main vectors of social and ethical thought. The “foreboding” of social change led to the search for solutions at the level of ideas.

The development of social theories, both in Europe and in Russia, was produced by socio-political transformations. Interest in the world of morality is traditional for the national thought, but it should be specially noted that it is in this historical period that ethical issues become dominant in the philosophical and socio-political discourse of Russian society, determine the main vectors of worldview searches.

This circumstance was caused by various factors: socio-political events of the second half of the XIX century, the consequences of the reforms of the 60- 70’s, the awakening of the moral consciousness of the public, the revival of university science. Moral reflection was facilitated not only by the development of the theoretical level of moral consciousness, which first found its expression in university thought, but also a broad discussion of moral problems in Russian society, literature and journalism.

Russian thought was supposed to provide answers to historical and social demands, to form an intellectual environment that would allow the determination of public selfawareness. Therefore, the ethical constructs of Russian thinkers of this time were oriented toward the formation of value vectors of development.

The formation of the intellectual field of Russian thought, its consolidation and polarization, contributed to Russian fiction and journalism. In many respects it was Russian literature that became one of the first forms of self-consciousness of the society and a catalyst for basic social and moral problems. In Russian journalism the most radical direction of Russian thought is formed-Russian radicalism, for which the view of morality as an instrument of criticism of society was characteristic.

This point of view will subsequently lead to the rejection of ethics as a theoretical level of moral consciousness and an understanding of morality as a normative and critical instrument of influencing society. For Russian radicalism in the spirit of the Marxist theory, morality is an instrument of criticism of society, and for Russian philosophers, as, for example, representatives of the Russian school of the philosophy of law, morality is one of the basic mechanisms for the formation of society and social regulation.

Despite the social orientation of Russian radicalism, the main theoretical and practical task was built around political goals, solving problems of power, building political parties, changing the form of government, political representation, etc. Another vector of Russian thought is represented by the works of Russian philosophers of the late XIX century, in whose works the reflection of public morality, the ratio of individual and socially in morals, subjective and objective, was revealed with the greatest problems and completeness.

Moral mechanisms of social interactions were considered. The formation of Russian society, its institutional basis, selfconsciousness, expressed primarily in moral reflection, can be called one of the significant outcomes of the XIX century. Public consciousness is conceptualized in social philosophy and social ethics, in which the moral goals, ideals and tasks of society are formulated. In this historical period a special intellectual stratum of society is being formed – the intelligentsia, which was striving not only to realize its goals and tasks as a specific social group, but to define the ideals and values of society as a whole.

By the end of the nineteenth century, ethics has reached public problems, it is not the desk theories that require it, but the answers to social, political demands of society and personal involvement in the moral historical choice. Theoretical discussions went beyond the boundaries of university audiences and became one of the factors shaping both the social moral consciousness (at the level of public morality) and individual moral consciousness, personal moral reflection.

The high level of theoretical ethical reflection that emerged in the intellectual environment of this period allowed to build and substantiate a system of moral ideas that form moral convictions and constitute a special ideological level of the moral consciousness of the individual and society. At the ideological level of moral consciousness, a socially significant value series of moral concepts structuring the moral convictions of the individual is built.