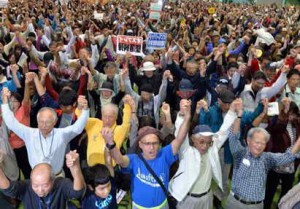 Do Okinawans have the right for the self-determination? Who is the sovereign over the land, sky, and ocean in Okinawa? Okinawa has never given up their struggles to acquire the fundamental “human rights” that were disregarded and ignored from time to time under the name of “Japan-US peace treaty which caused colonial relationship of Okinawa with Japan under U.S.

This study analyzes enormous Okinawans efforts for the struggle and their goals of getting their rights to have their self-determination. 1995 was special year for the people in Okinawa. The year 1995 can be considered as a transition period of modern Okinawan political history. For more than a half century U.S. military forces have been stationing in Okinawa to serve the national interest of both Japan and U.S. And Okinawan people’s human rights are disregarded and or ignored from time to time.

When three American soldiers abducted and assaulted a 12- year-old Okinawan girl, “Okinawans’ anger to the American military presence exploded in the wake of the rape (Taira, 1997).” This resentment led not only to reconsider the military issue but also the relationship between Okinawa Prefectural Government and Japanese Central Government in Tokyo. More than a half a century, Okinawans have never given up demanding to both Japanese and U.S government to reduce or withdraw the American military bases from Okinawa, and simultaneously all these acts in the past and present have encouraged and strengthened Okinawans peoples’ determination in getting their goals.

Thus, since 1995, the various effective styles of the resistance and opposition to both Japanese central government: 1) asking for equal treatment of American soldiers under the Japanese Criminal law, 2) voting for referendum of issue concerning the presence of US military bases by Okinawan Prefecture and referendum for U.S military relocation issue in Nago city, 3) refusing by Governor to perform a delegated function by the national government to secure the required documents for the land lease for the U.S military use, 4) holding mass rallies demanding withdrawal of U.S. from Okinawa, 5) making the plan for establishment of basic law of Okinawan Autonomous State, 6) appealing Okinawa as Indigenous peoples in the Ryukyus to United Nation.

In this paper, I attempt to connect these resistance movements to the different ways of achieving Okinawa’s self-determination by categorizing and theorizing them into political structural models such as; 1) statewithin- state, 2) nation-within-nation, 3) free association, and 4) independence models.