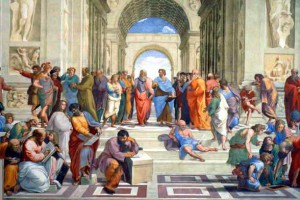 By studying this discipline, as aesthetic, I found that aesthetics – is primarily a philosophical science. It examines the nature (ie functions laws – which are common, and laws) aesthetic consciousness (ie human activity and society in general).

Aesthetics is a science of understanding the world, the creative relationship of any person to reality, science and contemplative about something that is not based on the desire of certain benefits or practical use (the study of non utilitarian).

Aesthetics is the science that comes out of the organic unity of its two distinctive components: 1) as the aesthetic expression of becoming human values; 2) artistic activity. Both parts although closely, but relatively independent. The first deals with the nature, specificity and aesthetic creativity, aesthetics category – a great, tragic, comic and so on.

The second part covers the artistic human activity, its structural and functional characteristics, the nature of artistic talent, species, genre and stylistic originality art and more. For centuries acted as a science aesthetics of beauty and science of the laws of art. An important role in the aesthetics takes art as a kind of aesthetic knowledge and aesthetic activities. The subject of the study of aesthetics is the broad scope of human aesthetic attitude to reality and above all art as its highest form.

In modern society due to the extensive penetration of art started in different areas of life and consciousness, an extraordinary expansion of the sphere of aesthetic understanding of reality along with the traditional display of aesthetic problems in nature and art. An important object of aesthetic research and science were those species that have received intense aesthetic development activities beyond art and cover issues of technical aesthetics, design activities aimed at forming and organizing subject-spatial environment (aesthetic environment organization) question of aesthetic education, some other areas of aesthetic manifestations, such as sports (sports Aesthetics).

This expansion of the subject of aesthetics is closely related to the final stage of its selection as an independent field of knowledge, especially in relation to philosophy and art history, in an environment where it traditionally developed.

The purpose of aesthetics is considered by many scientists is the philosophical study of art, and as a result of the study, formulating critical judgments, opinions, conclusions. In addition to questions about the nature of beauty and aesthetics covers general questions relating to the evaluation of various works of art.

As a science, aesthetics, of course, is philosophical in nature, but has its own specifics, a special object of inherent laws – laws of aesthetic assimilation of reality. Since the laws aesthetic development of the world’s most complete, concentrated and directly manifested in art, the aesthetics can be rightly regarded primarily as the science of nature and its laws. Art, as the creator of aesthetic values ​​affects the development of aesthetics in general. For its part aesthetics matter of general theoretical framework (metatheory) in respect of all other sciences of art (literature, fine arts, theater studies, musicology).

Aesthetics explores the connections and relationships between different disciplines of art, examines the methods and limits of their application, exploring ways to introduce new concepts of art.

The traditional concept of Greek aesthetics associated with the Greek “eysetykos” – sensual. But we can not get around here and these Greek terms like “estanomay“, “Estes” “estanome” can not be ignored by the process of formation and personal relationship. But mentioned dates correspond to the notion of feeling, they reflect the complex process of developing their own formation to object oriented person with their own senses – sight, hearing, touch, need to trust them.

The origin of the first aesthetic ideas should correlate with the value of which Greek philosophy gave human feeling at all. Analysis of their attempts to classify, identify opposing forces are important sensory components philosophical views The ophrastus, ALA-Meon, Empedocles, Pythagoras. Based on their reflections on the nature of feelings, it was already sufficiently differentiated feeling beautiful or ugly, tragic or comic. So, originated in the bowels of general philosophical tradition, aesthetics “lined up” its own subject, and reflecting the heritage and failures of Greek philosophy.

The first attempts to use feeling as an engine for aesthetic understanding of certain phenomena associated with the Pythagoreans -classes philosophy founded by Pythagoras in the VI. BC. e. Pythagoras identified the concept of harmony, beauty, perfection and harmony of thought foundation number.

Later, the term “estanome” “estanomay” “eysetykos” lost direct link to the notion of a sense, the subject of aesthetics began to make sense because much broader in scope and content concepts: perfect, proportionate, harmonious, beautiful, aesthetic.

Based on all read and studied, I can conclude that this multiplicity of further interpretation of aesthetics leads us to the need to reconstruct the history of science becoming the subject of aesthetics, which has long and deep roots. The first shoots of artistic knowledge and understanding of reality are to be found in mythological texts. Another interesting fact is that the formation of aesthetic knowledge is not associated with any particular region or country, as is characteristic of both Greek philosophy and philosophy of China, India, the Arab-Muslim countries, Byzantium those distant times.