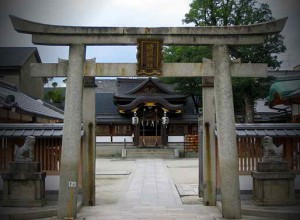 I focused on Onmy?d? and examined how this little studied Japanese system of beliefs presents itself in modern-day Japan. Onmy?d? is a religious belief that was particularly influential during the Heian period. It derived from the Taoism of China and employs the use of the Theory of the Five Elements. This system of beliefs requires a strict observance of certain rites and taboos, and revolves around the use of astrology, augury, astronomy and incantations to foretell disasters and counter misfortune.

The rising popularity of Onmy?d? since early 1990s in Japanese popular culture such as literary books, movies, dramas, video and internet games, manga, and anime, has created a new interest in this enigmatic practice, an interest that has spread to oversea countries of China, Taiwan, Hong Kong and Singapore and resulted in a series of Japanese scholarly publications, documentaries and exhibitions held in Kyoto and Osaka. The Seimei Shrine which practices Onmy?d? set up a website in tune with the boom of the religion in popular culture.

I combined a close analysis of the Seimei Shrine website with my own ethnographic experiences to analyze how the shrine constructed its religious identity as it attempted to differentiate Onmy?d? from prevalent imaginations of this religion in popular culture. From the website, I identified several strategic measures employed by Seimei Shrine in its identity construction. The shrine reconstructed its image as a modern religion that is relevant in contemporary society and engaged in domestic and foreign cultural exchange while taking care to distant itself from magical elements that are commonly associated with Onmy?d?.

It also appealed to traditions by emphasizing its strong links to the Japanese imperial family and downplaying the foreign origins of its religion. The Seimei Shrine’s construction of itself as polytheistic and sharing Shinto roots followed mainstream Japanese conception of religion. However, the attempts to fit into contemporary society and integrate into Shintoism raises the question of Onmy?d? losing its distinctive nature and risking the possibility of being further subsumed under the dominant religions. The Seimei Shrine’s attempts at identity construction provide an illuminating insight into the minor religions’ efforts to re-assert themselves in modern Japan.