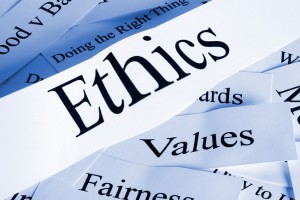 Ethics (translated from Latin ethica- custom) – is the science that studies the moral values, morals. This is the philosophical discipline that studies social norms, morals, behavior and customs.

The origin of the word “ethics” was starting from ancient times and came from the ancient Greek word, which had its value at various times. For example it initially translated as location, later – nature, tradition and way of thinking. Then, after a while, the famous ancient philosopher Aristotle formed adjective, taking as a basis the word “ethics” (an important character, temperament) – “ethical”, which meant special groups virtues – courage, justice, temperance, wisdom and so on. That’s why Aristotle called the ethics as a science of personal qualities (ethical virtues), the dignity of human nature.

The term morality emerged in IV. BC .. It was introduced by Roman philosopher Cicero (106 – ’43 BC. e.). It arose similar to the word “ethics”. From the Latin word moris translated as fashion, trim, custom nature of man, his character. Cicero created from this word adjective “moral”, which refers to the custom nature.

First, the meaning of these terms (morality and ethics) were the same, they were not distinguished. By the time, moral evaluated as phenomena that occur in the real world – of justice, good, evil, customs, norms of behavior; and ethics as the science that studies these real phenomena, that is called morality.

The biggest contribution to the development ethics as a science was done by Aristotle (384 – 322 BC.). He was Platon’s student, Greek philosopher, which thought of interpretation of the concepts of ethics. His works are known until today. Aristotle used the term ethics to refer to this concept as the common virtues of human nature. Character of man, his temperament, according thinker are virtues, which inherent in a man.

‘Nicomachean Ethics “,” Politics “,” Evdomova ethics” are known as the best Aristotle’s works concerning ethics. Thinker tried to explain and most importantly to revealed the origin of moral idea and how way of life bound with it.
Aristotle argues that everyone has their own idea of good, evil, moral views and all of them come from the way of life.

Based on this philosopher identifies three main, possible approaches to people’s life:

1. The life of the majority. Everything people do, is doing for fun. And they understand the concept of happiness the same way.

2. Statehood. The concept of happiness understands in identifying people’s respect, people tend to make them respected.

3. Contemplative. Man feels happiness when you realize the truth. He seeks the truth.

Philosopher condemns the first lifestyle, do not support the second, and approves the third because contemplative activity for humans is the highest.

Also one of the most important Aristotle’s studies is the doctrine of morality. He studied ethics and morality based on the doctrine of the soul. According to this doctrine the soul is divided into two parts – a reasonable and moral. The moral part, or as it is called component) is divided into virtue (1. natural; and 2. with elements of prudence). A reasonable component (part) is divided into theoretical – cognitive and prudent. Looking at this distribution philosopher wanted to show that people have the right to choose: what to be, what to do, etc.

Author considers that moral education is important because without education all of the human virtues can not be transmitted from generation to generation and do not run other people.

Also author supported the real friendship that was based on courtesy, kindness, respect each other. Aristotle considered there are an integral part of the observance of human virtues. It is justice. It allows you to do the right actions in relation to other people, given their interests.

Having reviewed the basic elements of ethics we can define its subject. If you look at the development of our society, we can see that the subject of ethics changed historically due to two reasons:

1. Attitude to morality, moral standards changed constantly (all, that was moral on the one hand, was condemned and became immoral at another hand);

2. Mankind is evolving constantly, and so various aspects of morality reveal. We study the principles, relationships, the essence of morallity, etc.

The main subject of ethics previously advocated morality, but then, due to these two reasons, moral standards become the subject of ethics and morality appears as the object. Morality is a system of diverse views, norms, perceptions, evaluations, which is regulating behavior in society relationships and in society in general. Moral norms are rules that help regulate morality.

In general subject of ethics is the moral choice of the person who picks up tools, techniques for achieving this choice.

So we can conclude what began as historically modified in the subject of ethics.

As we already know ethics is the science that studies the moral values, norms, morality itself. It’s object is morality, and the subject – moral norms. Word ethics appeared at the days of Aristotle in the IV. BC., and remains to this day. Then science ethics was studying ethical virtues, human nature, but they meet the requirements of the time. Aristotle himself made a huge contribution to the development of ethical science. He introduced the basic concepts which we use until this day, but the meaning of these concepts has changed. There are a lot of reasons and one of them is that humanity does not stand still, every century features its own characteristics and each period has its concepts of morality. This is what Aristotle argued that the concept of morality depends on the people themselves, their values, of attitudes to life and education.

Immanuel Kant (1724-1804 gg.) – was the german philosopher, who considered the founder of German classical philosophy, which describes ethics as “practical philosophy.” According to him, it defines culture of relationship based on the research of spiritual personality structure. Ethics is humaneness so everything that the person do should be humane. He argues that greed can destroy friendship, love, trust.

To see the difference ethical doctrines, we need to consider the characteristics of different times.

1. Ancient World (4000 thousand. BC. E. E.). Ancient world includes Ancient Egypt, India, China. The main thing that unites them is that rules and regulations are closely related and governed by religious beliefs.

2. Antiquity (Ancient Greece and Rome). It includes works of Plato, Aristotle, Socrates. These philosophers try to consider morality theoretically. They talk about freedom, happiness, goodness, virtue, and so on.

3. The era of the Middle Ages and the Renaissance. Ethics comes back to religion, but religious doctrines are more meaningful. The main objective observance of religious rules – is to achieve unity with God in paradise (T. Morra N. Machiavelli).

5. Age of XX century. Socialist morality. It means all for the benefit, but at the same time hard work, mutual support, and so on are appreciated in humanity.

6. Age of the XXI century. Socialist morality disappeared, applied ethics, which divides ethics in different sectors, appeared and each sector has its own morality arises.

Ethics is multifaceted science, its essence lies not only in morals and morality, but also in personification of the people and itself.

Despite the fact that with the development of human morality develops and supplementes too, we can not say that morality in different times was completely different, but it differents and depends on the people themselves and many were still came in our time, and this experience we use actively.