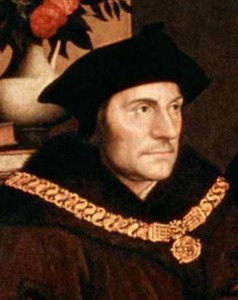 Not regarding the extremely utopian mindset of Thomas More, the end of his life was undeservedly tragic. He was destroyed by the system because of disobedience to its rules, pursuit of the higher values, happiness and justice. In our days XV century is perceived like it has no impact on our lives at all. But in fact the world has not changed so much in a moral sense. There are too many unsolved problems left since then. People suffer of ignorance but stubbornly refuse to be saved. They keep on crucifying prophets.

In his book “Of a republic’s best state and of the new island Utopia” or simply “Utopia“, Thomas More highlights the realities and possible prospects of the state establishment, and probably the establishment of life or world itself.

In the first part of the book More analyzes the 15 century state system and social order in Europe and England. He exposes the relationships between rulers and subjects, between rich and poor, between person, the world and the other people to a crushing, but nonetheless constructive criticism.

More believes the institution of private property to be the cause of all the state problems. In this statement he means mindless and irrational using of resources by the rich, who usually got this resources inherited or acquired due to deception, fraud, etc., another words, resources that are not earned by honest work. More considers the idea of accumulation of money and property by people who do not create any social value of their work as absurd.

Further, in the second part are examined the most subtle geographical, architectural and political details of the country Utopia. This mysterious country is situated on a separate island, which is perfectly designed for military defense and strategic maneuvers of its inhabitants. Inaccessibility and good security are the necessary conditions for the existence of the country, which structure is fundamentally differs from all the rest existing in the world. Goodness should not be defenseless. Good people must defend their rights for this goodness, fight for their lives and understand the value of all listed above.

The capital of Utopia is Amaurot, which is central geographically and major among other cities, a network of which is stretched across the island. Each city is surrounded by acres where people engage in farming. The island has perfect functioning system of logistics that allows quick and economical procurement of provision and consumer goods to the cities. Here people care about their welfare and the welfare of the land that gives them everything that is necessary for life.

The most interesting question in terms of ethics is how the citizens of Utopia see and experience their existence.

The first thing that catches the eye of a traveler who comes to the island is peace and tranquility with which the faces of the utopians are glowing. They are childishly open to a new knowledge and experience, looking forward to learn from foreigners, and thank generously for valuable information. But not everyone is able to understand and accept their gratitude: it is not money, not gold, not expensive garments.

They will not overwhelm the stranger with values to which he is accustomed, and which are largely the same throughout the world, outside Utopia. These strange people will only teach the adventurer the art of living in harmony with himself, others and the world in general. They will show him the true divine nature of man, namely his endless possibilities and ability to live in happiness.

But the stranger should not be misled by boundless kindness and openheartedness of this great nation, because on its fate had fell not only crystal clear and sweet joy of ignorance of the problems of the world. In fact, on their share dropped a lot of hardships. The world can not tolerate perfectness. There is no substance in nature, containing pure a chemical element after which it is named. Perfect morality has to bleed for its cleanliness.

Of course, the work of Thomas More “Utopia” can and should be criticized. He himself had not considered the book as perfect and with his friend and adherent Desiderius Erasmus began to correct and prepare it for reprint immediately after the first edition. “Utopia” like many other books that carry the truth, could not avoid censorship. Nevertheless, it caused massive response in the society and a flurry of positive feedback from enlightened minds of the time, significantly influenced the intellectual life of the educated people as well as the work of many writers, including Francois Rabelais, and later – Karl Marx.

Some may argue that we made a long way and corrected many errors. For example, we have already overgrown slavery. But it is now replaced with work. Yes, we have got absolute freedom of religion. But more and more people choose atheism because of the imposition of distorted values and world view by religions, their lack of evolution and meaning for modern people. What about the availability of information? Now you can get any knowledge almost for free.

Yes really. But are the governments and corporations interested in using this knowledge by the common citizens, or they just give to people only the stuff they consider necessary? Take a look at our judicial system, all these laws, civilized solutions of problems, almost complete absence of the death penalty. Great, but now our prisons are overcrowded as never before, the imprisonment of people costs a huge amount of money. Prisons have turned into an industry that does not benefit anyone. Unfortunately, this is not a complete list of inconsistencies between the claims of society and harsh reality.

Humans are born to be free and happy, but at the entrance to this world the system is waiting for them to take away their natural rights, so the child does not even have any time to know what it means to be really human. More in his book shows us what we are losing, because he knows that in order to return something you have to know what exactly have been stolen.

Yogi Berra said, “If the world was perfect, it wouldn’t be.” But we were lucky, and it exists in the imagination of some people. We only need to recall forgotten image of this world and life will begin to change immediately.