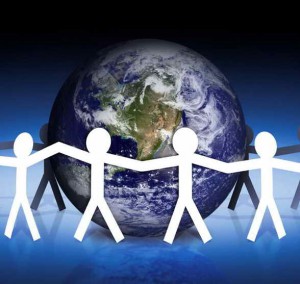 We are witnessing the global recession of democracy nowadays. That is why this phenomenon is something more than just a political regime that recognizes the principle of equality and freedom of all people and their active participation in political life. It is an aggregate of values that influence the process of how the society is functioning. Democracy became the doctrine that many countries are aspiring to implement. That is why understanding of the democracy is crucial in today’s political life.

Oxford dictionary defines democracy as ‘a system of government by the whole population or all the eligible members of a state, typically through elected representatives’ [‘Democracy definition, Oxford Vocabulary, available at https://en.oxforddictionaries.com/definition/democracy].

Considering the growing numbers of democracy, it is clear we cannot define its main features only by a definition above. American political sociologist Diamond Larry suggests us two types of democracies – electoral and liberal [Diamond, Larry ‘Defining and Developing Democracy'(1999), available at http://www.u.arizona.edu/~zshipley/pol437/docs/Diamond.pdf].

Electoral democracy is a civilian, constitutional system in which the legislative and 118 chief executive offices are filled through regular, competitive and multiparty elections with universal suffrage. It is a means for citizens to choose their political leaders and ability to replace them in free, regular, meaningful election if needed.

Electoral democracy supposed to include minimum levels of freedom such as freedom of speech, organization, press etc. It is a minimum requirement for a state to be listed as democratic. We can observe intensive growth of democracies, which can be clearly observed from the statistics. Therefore, there were 33 democracies in 1967 (less than a third of all states) and 87 democracies in 2010 [The data about democracy available at https://ourworldindata.org/democracy#note-1].

But does it mean that all of these states turn into democracies in such a short period of time keeping all qualitative features of democratic regime? This is where we should distinguish electoral and liberal democracies. If electoral democracy is sufficient freedom for elections to be meaningful, free and fair then liberal democracy in addition has ‘constitutional spirit’ and can be considered as high-quality level of democracy.

As Diamond Larry explains: “liberal democracy provides comparatively good protection for human rights” [Diamond, Larry ‘Defining and Developing Democracy’ (1999), available at http://www.u.arizona.edu/~zshipley/pol437/docs/Diamond.pdf – p.34], which includes following components: extensive freedoms of speech, press, association, movement, thought and belief, religion as well as freedoms from torture, corrupt demands and impositions, violence and coercion by state and non-state actors. It is also important to understand that democracy is evolving all the time. New democracies can be improved or they can lose their crucial qualities.

There are many factors influence the democracy’s development such as specific features of the country, civil society, responsibility of its officials etc. Another political scientist Wolfgang Merkel suggests us a concept of embedded democracy, that follows the idea that stable constitutional democracies are embedded in internal (secures its functional existence) and external(protection from destabilizing tendencies) ways [Merkel, Wolfgang ‘Embedded and Defective Democracies’ (2004), available at https://www.wzb.eu/sites/default/files/personen/merkel.wolfgang.289/merkel _embedded_and_defective_democracies.pdf – p.36].

Embedded democracy can be considered as complex of following components. First, democratic electoral regime the main function of which is providing citizens with equal rights to vote, free and fair elections and meaningfully elected representatives. Second, political rights which are backbone of partial regime and can be considered as vertical dimension of democracy.

Quintessence of political rights is not only citizens’ right to vote, but also ability to develop organizational and communicative power as well as developing political opinions in public arena. Third, civil rights is a principle that the state is bound to uphold its laws effectively and to act according to clearly defined prerogatives.

Basically, it can be considered as rule of law and is essential element when it comes to the limitation of the 119 exercise of state power. Foundation of civil rights is equal access to the law and equal treatment by the law. Horizontal accountability and division of power can be considered not only as a separation of powers but responsiveness of government to check and balance each other. Fourth, horizontal accountability is a crucial element when it comes to keeping the structure of state’s power.

Fifth, the effective power to govern is a crucial element of democracy. The key of effective power to govern is democratically elected representatives. It means without democratically elections all other attempts to develop democracy are determined to be unsuccessful. If the partial regimes are not connected together or one its components is damaged then we cannot think about embedded democracies but defective democracies.

As it was mentioned before democracies are constantly evolving phenomena and can be improved or cancelled in a very short period of time. But it is important to remember that high-quality democracies are rather evolutional process but not revolutionary. It means that democracies cannot be advanced instantly and demand time to develop.