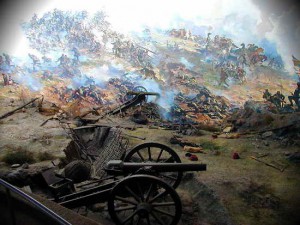 Last decades are characterized by in the number of military conflicts on religion and ethnicity, which lead to activation of non-state actors. These include international institutions, non-governmental humanitarian organizations, multinational corporations, and also terrorist organizations, guerrilla and separatist movements, the activity of which is accompanied by a large number of victims and destruction.

The level of their military capacity allows them to function at the same level with state armies and to have a major impact on international politics. Due to the lack of sovereignty, non-state actors cannot be considered legitimate by the participants of the military conflict; many reasons for entering into war are also questionable.

Moreover, if there are grounds for obtaining the status of a legitimate military actor, what is the order of assignment of the legitimate functions? This range claims on the question of the moral justification of the studied issue reflects mostly negative attitude towards non-state actors and recognition of their actions in excess of the existing norms of just war.

However, the just war theory, being self-developing structure, and based on its core normative ideas – the need to minimize the usage of military and repressive police forces – is trying to respond to the updating and comes to the conclusion that the classical formulation of its provisions should be revised or edited. The report will consider possible solutions of this problem. Non-state actors’ activity can be considered as morally justified, if their aim is the just restoration in a particular region and the methods of implementation are not violent.

Therefore, war participation of terrorist and extremist organizations, pirates, gangs, and other armed associations is considered as illegal. The actions of guerrilla and separatist groups are justified if they focus on selfdefense from external enemies, fight against genocide and destroying of people, and the cessation of political, economic and cultural discrimination.

These structures should have a clear internal organization, have the support of the population and be responsible for their actions.

The activities of these actors must comply with the principles of likelihood of success, proportionality, distinction, and last resort.

These criteria make possible justification of non-state actors’ military actions. The world community must recognize the transformation of international relations and lock them in the relevant normative documents and moral doctrines, particularly in just war theory.

Otherwise, the absence of a legal basis and moral basis removes all obligations with participants of the military conflict and allow the usage of any military action, ostensibly aimed at solving real problems.