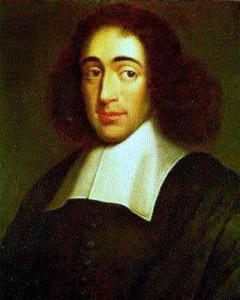 Benedict Spinoza (1635-1677) made a big input in ethic changing it in natural philosophy. His main work is “Ethic” the doctrine of substance. The thesis of the rational nature of man stands in his seminal works. His ethics has something in common with the ethics of Hobbes and is in its incompatible denial of natural origin. But nevertheless they differ in its main definitions.

Scientist in some way continued Dekarta and made his further belief about nature, but in denying the divine origin of the concepts of ethics Spinoza made more preference to Hobbes. It should also be noted that developing their belief natural science and completely make himself free from Christian mysticism, Spinoza should understand very well in nature and in man to follow in the ethics of Hobbes.

And based on that, interpreted that ethical is not infringement of the rights to freedom of expression by the government, but rather a person’s position in society has nothing to do with the purity of her mind, she has right for expression of thoughts, and no matter correct it or not at all, “a man thinks, and thus he lives” . Spinoza really created the doctrine of morality, which inspired with ethical content.

By thinking Spinoza came to the following conclusions:” Freedom and mind is the same. Both is nothing else as separate wish and ideas. False conclusions are only a lack of knowledge, from whom are perverted and confused thoughts and wrong acting”. Generally in the mind of everyone thought might be full, tactful, or confused or incomplete. When thoughts complete then follow action, and when the idea is incomplete, it is as if in a passive state, does not apply. And the more a person has imperfect thoughts, the more his soul is capable of passion.

According to his teaching , soul and body is “ one thing which we consider in terms of thinking, in terms of draft.” He proves this situation perfectly, completely denying other actual conviction, claiming that any action of the human body is influenced by soul, which in turn has considerable power over the body. And people agree with that, that causes of action are not always characterized themselves. “The decision to place the soul in it with the same necessity as ideas (opinions) about the things that really exist.” From this it follows that our body and soul are inseparable together.

Love is nothing else asjoy, passion, state capture, accompanied by actions and external factors, and hate – is nothing else like sadness, depression, something negative, which is also accompanied by external factors. And that we can explain also what despair, pleasure, fear, sense of security and hope is (“joy that comes from the image of things from the past, as a result of which we have doubted”) and remorse (“the sorrow, the opposite of satisfaction”) . These were the main facts and in order to Spinoza put all their basic ethical position. “For example, we want to assert about yourself and about favorite subject of all that we imagine, is causing us joy or favorite things, and vice versa.” Since then, he led his high morality.

He claimed that independent do not exist in nature, but there is everything you need. “Knowledge of good and evil is nothing else as affect (feelings) of joy or sadness, because we are aware of it.” “We call good or evil, what is useful or harmful for the preservation of our existence; what increases or decreases, supports or hinders our ability to activity “.

Spinoza built his ethics theory in search of happiness in the understanding of man. Humanity strives for perfect happiness in their life, and have the desire to encourage ethical opinions mode of existence, but here people can not be free, because it can do only that is necessary and stems from its essence.

Mainly in Spinoza’s ethics problems of individual and total becomes pronounced epistemological bright colors, good and evil explained in the context of utilitarianism. An important component in order to understand Spinoza’s ethics and its foundation in ethical philosophy is work about the human body itself as an object of the soul, about the comparison of the order of things and ideas about the three kinds of knowledge, the essence of which is in the imagination, and that becomes the main and only reason for mistakes in mind and intuition knowledge.

Spinoza portrays man as the most realistic subject. As you know, almost every one of us seeks not only to maintain their livelihoods, but increase it due to its power.

Increase of perfect person accompanied by feelings of joy and its reduction – dissatisfaction and sadness. Together with those human desire and activity indicates its beginning.

Spinoza also believes that the key to explaining human behavior is understanding in the state of affect and in his nature. That is why ethics, in its turn, should be based on natural laws of behavior, from which comes a certain action, and also follows the “triangle of nature implies that its three angles are equal to two right angles.” The main reason virtues thinker believes the human instinct for self-preservation.

The awareness of the benefits is the most decisive force of human behavior. Good identically to benefit of a man, and evil – is that prevents benefit. In fact, there is neither good nor evil, it is human whims.

None of things can not be destroyed without action of external factors, because human instinct for self-preservation – is the destruction nonactional states of nature. Destroying them, a man is free from the power of the passions, and live by the laws of conservation itself. The very state of transition from inactive to active affects and is by virtue of moral perfection. After all, that determined the inactive states may also be determined and by mind. A virtue is the same in dealing with determination from one level to another.

Thinker believed that human behavior depends on rational love for God.As God by Spinoza is nature. “Besides God can not be another substance, and it can not be presented.” Mind versus affects not only repressive ground, but reach the goal only if he acts as replacing affect feelings.

The last goal of human by Spinoza is bliss, which consists in the intellectual love to God. The author wanted to invent a universal ethics, the subject of which is the personality.