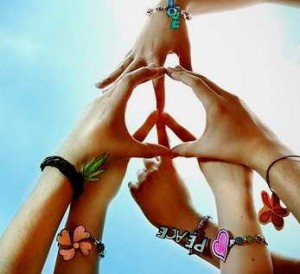 Hearing the word “pacifism“, my associative thinking shows a portrait of one of the most famous Indian politicians of XX century Mohandas Karamchand Gandhi. From that big stratum of world history, which I studied at school, namely the activity of this politican, in my opinion, demonstrates pacifism in action. The principles of his socio-political and philosophical-religious teachings:

1) Achieving independence of India is possible only through involvement into a struggle of the masses and their abidance of non-violence;
2) Condemnation of the class struggle;
3) Requirement to resolve all conflicts through arbitration;
4) Desire to unite in the struggle for Indian independence without considering their religious affiliation, nationality and caste.

In practice, these principles allowed M.Handi achieve Indian independence through compromise, negotiation, agreements based on mutual concessions with British authorities. I think, researchers of the problems of pacifism will agree with my argument that the methods of nonviolent struggle for independence that were applied by Gandhi had a great impact on the modern pacifist movement. Interest in using of organized nonviolent resistance increased at a time when nuclear weapons appeared.

Speaking about the new stage of movement we need to call to mind А. D. Sakharov – one of the authors of the Soviet hydrogen weapon. And yet a lawyer, dissident, active politician, academician of the USSR, physics. In 1975 he became a Nobel Peace Prize laureate. With the end of 50’s of twentieth century, Sakharov actively advocating for termination of testing nuclear weapons.

And despite the conflict arising between the Sakharov and then head of the USSR M. Khrushchev in connection with peacekeeping operations of academician, Moscow Treaty (1963) on the Prohibition of Nuclear Weapon Tests in water, space and atmosphere was signed. Since 1970 Sakharov actively engaged in human rights activities and was removed from the secret research linked with new types of nuclear weapons and deprived of the privileges of the Soviet nomenclature.

With 1970. A. D. becoming one of the co-founders of the Moscow Committee on Human Rights; In his articles, propagating through the” self-publishing” he raised problems of environmental pollution, canceled the USSR death penalty, the right to emigration against forced treatment “dissidents” in psychiatric hospitals.

In December 1979 immediately after the introduction of troops of the USSR in Afghanistan, Sakharov began to act of the condemnation of this event, determines the Soviet Union as State aggressor. He advokated boycotting the Olympics in Moscow in 1980 in connection with the invasion of Soviet troops in Afghanistan. In this regard Sakharov, giving an interview with one of the German publications, said: “According to the ancient Olympic status, during the Olympics war must be stopped. I believe that the Soviet Union should withdraw troops from Afghanistan; it is extremely important for peace and for all mankind. Otherwise, the Olympic Committee should give up of the Olympic Games in the country which is leading the war”. For his peacekeeping activities Academician Sakharov in 1980 was deprived of all government awards, was banned from living in Moscow, he found himself under the full control of the Soviet police.

But in time of alternation all charges have been removed from the Sakharov, he returned to Moscow, in 1989 elected to a deputy of the USSR. He witnessed the implementation of all ideas in human rights space too, and the “new political thinking” of M. Gorbachev enabled for a certain time to stop the race of nuclear weapons.

Andrei Sakharov was lucky to see the fetuses of its activities, unlike the famous French pacifist Maurice Torez.
M. Torez – less well-known political figure in comparison with M.Handi and A. Sakharov. This is due to its communist ideology; and few ordinary Ukrainian is now aware of it’s activities. Torez – active leader of the French Communist Party in first half of the 50’s of twentieth century.

Before the Second World War, he actively developed the thesis that the war in the modern era can be prevented. At a time when the Cold War began, Torez claimed that in the current time war is not a fatal necessity and that peace can be preserved by joint efforts of all peace-loving nations. At a time when the international discharge started, Torez strongly supported this policy. In his speeches, he said that for the working people struggle for peace should be the main objective.

Unfortunately, at the present stage of human development when local armed conflicts threaten to develop into a world war, in world politics are no figures with active pacifist positions. There is no mass of resistance movement to war at the state level too. Today I would like to see something like the Helsinki process, which proposed the establishment of security in Europe and extensive cooperation of European countries, USA and Canada on the issue of peace. In the modern life realities pacifism should not be a “fashion brand” behavior of politicians, and must turn into a mass social and political movement that is created by people with an active civil position and only then real pressure on the aggressor states and cessation of armed conflict will be possible.