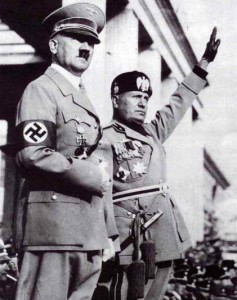 Modern political situation in Ukraine and between the nearby states as calls us to the observance of moral and ethical norms in society. We can trace as a public idea changed during this period, what mutual relations were folded and appeared respect to each other. Unfortunately, we realized a correct way to move that late, and late appealed to traditions, principles and moral rules.

Appellation “moral” is adopted from Latin from the word «moralis», that means moral. Thus, a moral is the system of looks, presentations, norms, estimations that regulate behavior of people in society. Important is that people must lean such moral norms like respectability, conscience, fraternity, mercy, justice, goodwill, respectability, indeed, equality of rights industriousness, peaceful, freedom-loving.

This work I want to devote to the ethic aspects of authoritarianism.

Authoritarianism – a form of government in which power is concentrated in the hands of one person (group of persons). For frequent sign of authoritarianism is the use of terror and repression.

Authoritarianism is the inalienable constituent of all old paradigms, although him far it is not simple to recognize in maintenance of that or other structure, those or other institutes, ethics and world view. Most easy his displays can be traced at the study of methods and methods of with holding of power in a social structure, including methods of acquisition and maintenance of lordship over consciousness of people.

Foremost, any social structure is characterized by theme of management and control. None framework of society can long exist exceptionally due to a power compulsion, it must proclaim values that would be perceived by society and passed to the next generation.

Authoritarian ethics is based on irrational authority. And irrational authority is based on that power exists above people, manages them, from one side, and fear – from other. Influence can be physical and psychologically, real and unreal, it can be simply fears and alarms of people, what are under act of authority. Irrational authority is built on inequality and submission, on discipline that assumes priority of authority, that recognition of its right to unconditional approval. Such authority forbids criticism. In authoritarian ethics authority determines blessing people, sets norms and rules of his behavior, and people must execute them. It can be traced in the Third Program Communist Party of the Soviet Union “Code of ethics of builder of communism”.

“Authorship” and “implementation” of these norms, rules and positions can divide. “Authors” do not execute them, because does not count binding for itself, but they are required for others.

There are the aims and facilities of their achievement in authoritarian ethics. Authoritarian ethics does not consider main a value personality and her interests, and main is something external: interests of society or states, high idea, material interests. A person is the means of gaining purpose, and operates voluntarily or after a compulsion. The prime example of it is a statement, that victory in war must be attained by all means, not having regard to the amount of human victims, or terrorism, murder of innocent people for presentation of certain idea.

The basic method of the moral adjusting is an external compulsion. Authoritarian ethics leans against fear and violence. It requires not only an unreserved submission and punishes rebellious, or refuses to have something in common with them. Desirable are such internals of personality, as manageability and diligence, it allows easily to manipulate people and their behavior. Manageability is attributed to main virtue, and to disobedience is a main sin. One of unforgiving sins is open disobedience and questioned in the rightness of power. If a person “sinned”, then willingness to carry punishment for it, considered as confession of rightness of authority. People believe in what must unquestioningly obey, because I do not get the promised benefits.

Authoritarian ethics principle of collectivism is the basis, he is needed and has the pluses in a public moral, but required focused on public interest, submission of society and unitization of personality quality, looks and interests, that to be “as all”. Therefore authoritarian ethics conducts an irreconcilable fight against individualism, there is not a place to the dissidence. In this sense authoritarian ethics creates basis for the so-called “group egoism” that gives an opportunity to divide society into “our” and “unour”, that can be easily used for manipulation by behavior and public opinion.

Example of combination of authoritarian and humanistic ethics is Christianity. It carries in itself humanistic maintenance, gives a right for a choice to people, but in the same time, Christian religion mostly operated authoritarian methods, calling to God as to external authority, leaning on fear and punishment.

Perhaps we should agree that public morality is always institutional, it is based on organizational and procedural supported settings. This may be common traditions and practices accepted in society or private – codes, statutes, regulations adopted in various groups.

Society should not stop, should develop and improve gradually go to the ethics forms and qualities that are needed in the present. The experience of past generations, society must move forward to create optimal and comfortable everyone ethical qualities and forms of government, without coercion and terror, with the more humanistic inculcation.