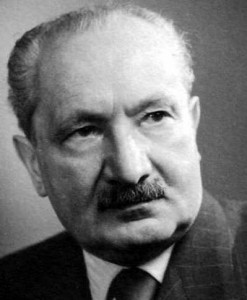 Heidegger have criticized ethical teachings that preceded him and constructed his own ideas about the social world and its ethical norms. The main emphasis he placed on the being-in-the-world that shared with other people.

This paper considers the key concept of Heidegger’s fundamental ontology – “Dasein” – from the standpoint of human existence, which essentially is a being-in-the-world. Equally, this statement applies to another original Heidegger’s concept – “Mitsein” or “being-with”, in other words – to a common being with the other. At the same time, the common beingin- the-world forms itself not under the influence of any social group or some people in the context of a certain historical stage of the society development, but rather the social structure with its social roles and the suitable ethical norms forms the common being-inthe- world.

Such coexistence implies an existential “care” for the others and Heidegger named it “fallennless” into the social world. It should be noted that the “fallennless” is not reflecting any negative moral assessment, it means the way in which the person discloses oneself in the world in factual “being-together”. Such disclosure is possible only through language in the process of interpersonal communication.

The German philosopher pays great attention to the hermeneutic function of language in communicative processes. He is proceeding from the assumption that human actions are always accessible to the understanding of other people, except in cases when they require a special interpretation. “Understanding” as a fundamental element of beingin- the-world is the basis of effective communication that regulated by social norms. They are consistent with ethical norms that also based on agreements between people regarding rules of conduct in society.

Thus, ethical norms presents in the form of a set of definite expectations of how a person should conduct oneself in a society. Such expectations of people’ behavior represent the “normality” of human life and determine the ethical component of the common social horizon.

16 thoughts on “Ethical Norms of Social Being in M. Heidegger’s Hermeneutic Philosophy”