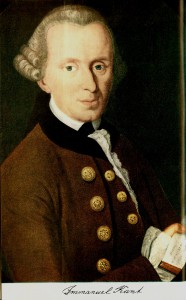 This presentation addresses the criticism of Kant’s ethics as being removed from everyday moral thinking through a discussion of Kant’s analysis of common moral rational cognition in Groundwork I.

It invokes Bernard Williams’ distinction between abstract, “thin” ethical concepts, such as “right” and “good,” which are the subject matter of much contemporary ethical theorizing, and concrete, “thick” ethical concepts such as “coward” and “lie,” which, on Williams’ view, are the “given” of ethical thought, and thus should form the starting point of ethical reflection.

It argues that, while Kant’s analysis in Groundwork I is often presented as an analysis of the thin concepts of “right,” “moral worth,” or “duty,” Kant’s argument cannot be properly understood without invoking thick concepts, such as “selfish,” “beneficent,” or “conceited,” as the commonsense starting point. Kant’s analysis of these common concepts aims to clarify the nature of the moral order, as represented by the moral law, and to situate the human being within the moral order.