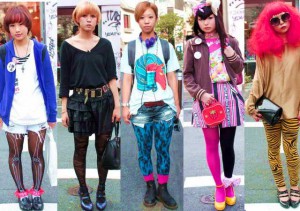 Before we talk about Japanese fashion, we must say Japan is very interesting but very “strange” country. Its fashion has studied for many years. Japanese create fashion trends and a certain style, using a variety of global brands. But it’s been worth it! Popular nowadays anime and such dance style as hip-hop, which became part of the culture in Japan, influenced on Japanese fashion. Even today we can follow fashion Japanese trends in anime films.

Another factor in the formation of Japanese fashion is that in Japan began to form many youth subcultures that enjoyed great popularity. They have always create particular style of clothing that “wearing” philosophical nature. He reflected essence of man. With subcultures often combine such expressions as “Japanese street fashion” because the greater number of subcultures it is a kind of protest against traditional Japanese ideals and standards of beauty, established social norms. Over the past few years, trends in Japan often changed. Consider also some of the most popular styles in Japan.

“Lolita” is one of the most famous street fashion trends in the country. This style combines elements of both traditional clothing and gothic, or even punk elements. The costume of style “Lolita” usually has shades of black, indicating that this are Gothic elements, and consists of a dress or skirt copper (knee length or slightly below), hat, blouses, shoes with high heels or platform, and various accessories in the form of crosses and similar items. This trend in fashion in Japan is the image of seductive girl in baby dresses to the knee, and with lace. Such dress can be seen in fashion era “Rococo”.

Another known styles of Japan is “Gangura.” The elements of this fashion trends are mini skirts (above the knee), thick false eyelashes, bright makeup (can even be painted face), “chocolate” tan, flashy large accessories, hair a bright color, or even several colors, shoes with platform. This style has shades of bright colors, usually pink, yellow and bright green, that emphasizes brightness and uniqueness of the individual.

Style “Harajuku” or also called style “Fruts” is bright, variety of colors too. But its distinctive features are “combination of incongruous” in clothing and excessive amounts accessories, namely “all at once”. This style can be combined as elements of gothic and cyberpunk, club and neon shades. The essence of this style is that everyone, regardless of their financial situation, can create a modern ideal of beauty. The main role in the creation of his image plays creative thinking.

Another unusual style of Japanese fashion is “Cosplay“. Its essence is that fans of anime or video game independently create and wear suits like the heroes of this or that game or cartoon. A popular print is different funny monsters.

And of course, all probably know that traditional clothing and national costume in Japan is “kimono“. This T-gown, which usually has the same cut, because figures of Japanese women are almost identical, similar. Sleeve are much wider than the thickness of the hand. Kimono, unlike European clothes, does not emphasize the human figure, it rather focuses on uniformity and plane. They believe that “the smaller bumps and irregularities aren’t beautiful”. According to them, girl in kimono should be like a candle.

At conclusion we can say that trends in Japan is most unusual. So if you are planning to go, example to Tokyo, you must be remembered that some images just passers people can not only shocking you, but also scare. In Japan people always want to be unique and fashionable at the same time. Most of the amount of their income they spend on clothes, trying to show own individuality, impress for others. Japanese designers, as opposed to Ukrainian and Western designers, instead of having to create clothes that will emphasize all parts of the human body, they change the shape of the human body through clothing. This is the feature of Japanese culture.

The reason for this is that the Japanese prefer the spiritual glory of man, not bodily. They believe that beauty should be opened gradually through various allusions and associations. This is one of the main factors and characteristics of fashion in Japan. Also characteristic of the fashion trends of Japan is combination materials that we believe generally incompatible, leaving ragged edges and making any arbitrary cuts. The famous Japanese designers claim that if a thing is perfect, it quickly becomes boring. Therefore, they prefer imperfection.

Japanese always want to find something very special, truly new. Therefore, it is hard to include collections of Japanese designers in the scope of particular direction, classical or vice versa – shocking, relaxed. This indicates that new direction in art aesthetics clothes is forming. This trend is developing its laws, principles of shaping and has the features and characteristics. This all allows us to say that Japanese fashion is unique phenomenon of culture, which is very popular especially among young people.