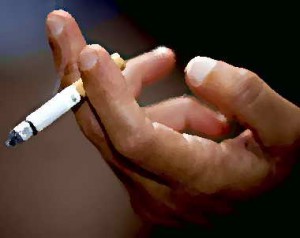 Recruitment for this study took place in the Emergency Department at Cooper University Hospital, as well as handing out flyers. Recruitment was difficult for this intervention. Overall, there were 65 potential participants for the study. Of that 65, 10 qualified, 34 did not qualify, and 21 never completed the screening process (i.e. no interest).

Of the 34 participants who did not qualify, some individuals did not meet the definition of underserved (n=11), others did not own a smartphone (n=8), some did not smoke enough (n=4), while the rest did not qualify for various other reasons (were visiting from out of state, substance abuse, chew tobacco use rather than cigarettes, asthma, no avoidance of smoking in the home environment during the duration of the study, etc.) (n=11).

We experienced many difficulties recruiting for this intervention with this particular population. In the future adaptations need to be made to address the unique needs of this population in order to fix some of the obstacles we encountered in recruitment.