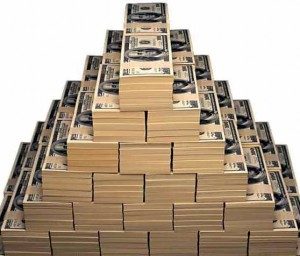 In the article we have characterized the pyramid schemes from a moral point of view; highlights the signs of pyramid schemes; analyzed their impact on the lives of citizens and the risk to which investors are exposed; emphasizes the need to be careful with such organizations and forming a critical attitude to the “easy money”.

Perhaps does not exist someone who would have never heard of pyramid schemes, many people had a personal experience. Today it is very common. Generally pyramid schemes have a dubious reputation. What are these “pyramid schemes” and if they have even a hint on morality? I will try to answer these questions …

To recognize a pyramid scheme is very easy:

• they have a hierarchical structure (there is a general director – the highest executive who directs all pyramid; under him are Chiefs of groups, which includes other members of the organization, they in turn control the lower subgroups and so on to the lowest party – of the same investor who suffers most);
• a very aggressive advertising which emphasizes the use of innovative (but before the end of unintelligible even experienced financiers) methods of multiplying profits;
• promises of incredible profits (20% a year);
• closed financial situation, lack of legal basis and licenses, and representatives assure that for their activities are not needed at all;
• the continuous multiplying new participants;
• entrance fees each new member;
• the amount of profit depends on the amount you attracted participants;
• leadership usually remains in the shadows;
• payments made to customers with contributions of other participants;
• lack of informing of the risks and in the case of devastation to depositors paid nothing;
• representatives of the company behave too active that alerted and constantly stress to contribute as soon as possible, frankly, is to some extent reminiscent of zombies (faster, faster …)
• lack of office and official registration and more.

Is there a little bit morality?

I believe that answer is obvious – morality and pyramid schemes are things іs totally not compatible. Pyramid schemes is outright fraud and deception.

They leave behind a lot of deceived people, some even not fully understand where to hit and receives income only the tip of the pyramid. And all investors instead are anywhere under the “pyramid” on top of it moving only their money, which, incidentally, have no way back. To depositors may returned doubled amount of their contribution, but only in order to gain their trust, and that next time they have invested a much greater amount. It is clear that this amount will not be back …

In my opinion, the top of pyramid schemes commit the real evil and unfortunately, it is very difficult to eradicate, their feeding below – depositors, and while they exist, so long will exist pyramid schemes. Unfortunately, law enforcement authorities is quite difficult completely to follow appearance and the existence of pyramid schemes because recently many owners carefully conceal their appearance or disguised as other enterprises. Modern masking of pyramid schemes: “elite club”, “propose to earn,” “work for housewives, women in a maternity leave, students and pensioners”, “earn money without leaving home”, “work on the Internet”, “earnings for selected” etc.

Nowadays, the phenomenon of “pyramid schemes” is not new; and there are many stories about that as these organizations openly “throw people”, this topic is actively discussed in different directions of the media. All over the world emphasizes the illegality and immorality of pyramid schemes:, they are banned in Ukraine and many other countries: Sweden, Turkey, Australia, Austria, Switzerland, Norway, New Zealand, Mexico, Nepal, Estonia, Japan, Portugal, Poland, Romania, China, Canada, USA, Spain, Italy, Denmark and others.

And it would seem that nobody would risk to contact them … And people will still looking for “easy money” and still exposed to advertising organizations that are the the real pyramid schemes. And even the one who got burned once already on this, could still be at risk again. Unfortunately today despite all the above, pyramid schemes actively thrive and spoil the lives of ordinary citizens.

Should also be noted that these organizations owned great suggestion and manipulation methods and actively use them in their advertising, and people did not even suspect. And even those who all his life trying to be cautious and wary of pyramid schemes, too, can “ensnare” because so attracted by the opportunity to make money and not to exert extra effort.

In order not to fall into the trap of financial pyramids, you need to understand that easy money does not exist and beware of organizations that offer them; also keep away of companies that have at least some signs of financial pyramids, and of course, is to protect from them other people. Today is a very important a critical attitude to the “easy money” and the metaphor of “Free cheese is only in a mousetrap” has become outstanding relevance in the modern world. This is especially important in order to survive in contemporary world.

If humanity will cease to take such organizations with their contributions pyramid schemes will cease to exist and this is the first but very important step in improving our world and fight against evil.

16 thoughts on “Pyramid schemes and their moral subtext”