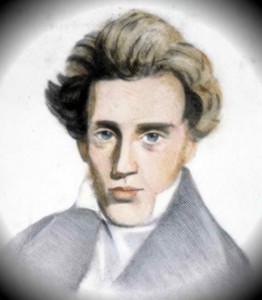 In all his works Kierkergaard criticizes contemporaries, the era and the society in which he lived. Kierkegaard was dissatisfied with conservative traditionalism, revolutionism, and reformism because they turned everything into politics and politics has become a field for politicians and their deals.

He regarded the revolution of 1848 as a “catastrophe”, a “historical convulsion”, defining the then revolutionary upheaval not as a single act but as a condition that threatens to become permanent.Kierkegaard’s philosophy is a reaction to the teachings of Hegel, the protest of man before the system. The Danish philosopher set himself the task of breaking through the realm of necessity for freedom.

He attacked Hegel’s philosophy, above all for devaluing the principle of opposition, for trying to reconcile in the higher unity the opposites of each given moment. “For philosophers, world history is over and is subject to reconciliation. That is why in our time the sad phenomenon of a meeting of young people capable of reconciling Christianity with paganism, joking with the titanic forces of history and at the same time not only unable to answer a common man on the question of what to do, but also those who do not know what they should do by themselves”.

The need for the development of a new philosophy, a new worldview, a new philosophical method of the vital in the air, and already differently from the opposite sides, was developed by Hegel’s contemporaries, his disciples and critics of his philosophy.

Kierkegaard stands on a par with Schopengaeur, Nietzsche, implementing the transition of philosophy into its non-classical form. He shifted the attention from some abstract systems or natural philosophical speculations to questions relating to the meaning of human life, he first introduced the term “Existents”, (Danish: Tilv.relse) – a present existence.

He revealed to us the world of the inner experiences of man, which occurs on special emotional-border states, which lies behind our fear, anxiety. One of Kierkegaard’s main points is: “True is not what you know, but what you are.” True from the point of view of Kierkegaard can not be abstracted from the personality, exist only in the sphere of knowledge, and do not affect the being of man and be the same for all.

True can exist only as a personal, in other words, existential. The existence of man is his true, and man can not have another true, except his own existence. If Greek philosophy begins with wonder, then the new European one is in doubt. The ultimate turn of doubt is despair, which, on the one hand, concerns the past tradition – and we see this even in the similarity of words: doubt – Zweifel, despair – Verzweiflung – words, in each of which the root “Zwei” indicates duality and rupture, and on the other hand, being in this past tradition, despair is already drawn to a new one, which is not in the traditional past.

Kierkegaard seeks to unfold the centuries-old tradition of Western European philosophy into another problematic field: philosophy should no longer engage in the search for true, not in the search for essence, or in the study of being: all these logical, ontological, epistemological problems proved incapable of awakening the inner forces of man and leading him to action – now they must give way to problems ethical and moral. The main goal of philosophy is to do everything possible so that a person can become himself, come to his own existence which mean find a true self.