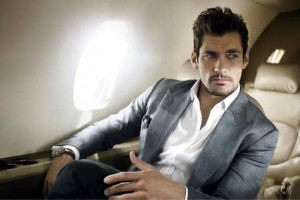 Humanity, which is developing, constantly changing, especially in the information society, absorbed all spheres of human life. Any event that occurs in the one place of the Earth in a few minutes will be known in the another one. Man’s image is not an exception. Nowadays, image is the business card in our society, which you should suit if you want to be successful. These two concepts are interdependent, if you want to be successful, you have to look successfully, and if you are successful, you have to prove it with your image.

Everyone wants to look successful and meet current trends of style, especially it is important for man. How do we imagine a modern successful man? Are there any similar features, which can only be with successful men? Did the style of successful man change during the history?

Nowadays, we can see many successful people. But who can be named as a successful one? In my opinion, success is a very subjective concept. One individual thinks that a success is when you became wealthy, another one considers success when the person became more respectable between others.

A successful man can be a businessman with the enormous income and a plumber who is loved, respected and needed in every house, and he, in return, loves his customers and his work. The image of two completely different people may be different and at the same time will be similar. These two men will be in absolutely different clothes and will absolutely differently speak, but they will look neat and will be happy.

The image of a successful man of the 21th century began to appear with the development of capitalism and a bit changed in our time. A stereotype of a successful man was formed in the majority’s minds. This person, first and foremost, has a big profit or good salary. Nowadays, the characteristics of a successful man are: most of the time neat outfit, expensive suit which suits well, well-ironed shirt, nice hair, nice shoes that match the suit.

Moreover, every successful man should have a status marker – it can be expensive phone, watch or car, or better all them together. A man should keep fit, ideally he should be slim. More often a successful man has a little weight, for woman it is more important than for man. In the Middle Ages, in reverse, fat man considered to be prosperous, and therefore successful. Eventually this attribute of a successful man disappeared in the consciousness of society.

Outfit is the very important constituent of man’s image because as talked it is said “The first thing one notices when meeting is his outer appearance”. The first thing that people pay attention at is appearance. The first impression stays for a long time, when you see somebody, you at once understand if this man has success or not.

Another important feature of a successful man is verbal and non-verbal communication. Immediately after the appearance check, the person pays attention at the style of communication, gestures, look, moves, facial expressions. A man should speak confidently, clearly pronounce words, have good communication skills, restrained gestures, confident look and posture.

The facial expression should be likable and, depending on the situation, confident and strict if it is a business meeting and kind, sincere, if it is a friendly meeting. Also a man should be a good speaker. Successful person, mainly, has to understand that he is successful and demonstrate it to the public. If you do not afraid of anything, do respect yourself and others, then the majority of these qualities appear in your verbal and non-verbal communication, while others come with experience and self-improvement.

Another important aspect of a successful man is a social component. It is your position in the society. Successful people should have a successful business, or high position, accompanied by a good income, be popular with women or have a family. Another important feature is the networking, good relationships with friends, who can help in a difficult situation. Successful man have to be respected among others, and show leadership skills.

I believe that it is mainly a stereotype, because a person himself make a goal and try to achieve it. Only he decides what a success is and what is not. If a person wants to be a teacher or a scientist, achievement of this goal can not be considered as a success if it makes him feel happy? Of course, a successful person has to have some of these qualities, but only a few. A stereotype always existed in the society that successful man is wealthy, but a lot of rich people do not have a success in other areas, such as family or friends who do not help or support him, which is an important aspect of a success.

If a man feels unhappy in this, is it possible to call it a success? So we can conclude that everyone can make bounds of his success, and social opinion should not destroy your subjective attitude. And there is only one the most important attribute of a successful man – it is a happiness. If a man is happy, so he has a success in his life and therefore can be considered as successful.

1 thought on “Style and Image of a successful modern Man”