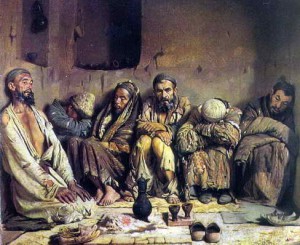 Political life in the Russian Empire in the second half of XIX – early XX century is closely connected with the origin, development and decline of revolutionary terror against the officials at all levels. A high level of social inequality, incompleteness of reforms of the 1860 – 1870s and the reactionary policy of the tsarist government became the environment that contributed to the formation of the revolutionary parties, that chose terror as main method of struggle. The question of moral and ideological justification of political terror was essential for all political movements opposed to the Royal authority.

On the one hand, terrorists actions were evaluated in terms of appropriateness, efficiency and impact on the propaganda on the masses. On the other, terror demanded a justification from the point of view of morality, where inevitably arose the question of responsibility for the murder, the value of human life and self-sacrifice. The political philosophy of Russian radicalism was formed in confrontation with the political violence of the state.

The revolutionary terror was opposed to formally legitimate state terror. The first text that explicitly called for terrorism against officials and “Imperial party” was the proclamation “Young Russia” written by Peter Zajchnevskij in 1862. In 1866, there was first assassination attempt on emperor Alexander II. However, the attempt of D. V. Karakozov as the proclamation by Zajchnevskij, didn’t found support among the democratic intelligentsia, but gave a formal reason for carrying out repressive policies against dissenters, the defeat of Ishutinskij society.

Important texts for the study of ethical political thought of the Russian radicalism of this period are the “Catechism of a revolutionary” by S. G. Nechaev and the number of works by P. N. Tkachev. Further policy of systematic terror was carried out by the revolutionary organization “Narodnaya Volya”, members of which became the authors of theory and practice of terror, that influenced all subsequent revolutionary movements.

The political crisis of the early XX century contributed to a new rise of revolutionary terrorism: the terror of the socialist revolutionaries, anarchists, social Democrats caused irreparable damage to the state mechanism. The paper attempts to show the evolution of participants’ views of the Russian revolutionary movement in the policy of terror by the above-mentioned periods.