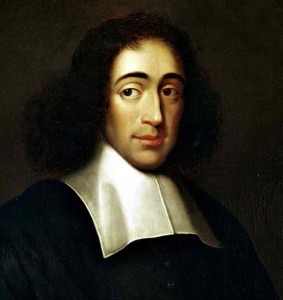 Baruch (Benedict) Spinoza is one of the most famous philosopher of the Age of Enlightenment, he is also outstanding metaphysician. Baruch became famous as a figure who studied rationalism and naturalism. His base works are ” On the Improvement of the Understanding “, “Theologico-political treatise” and “Ethics”.

Spinoza used geometrical method in his work, like Euclid, and built a number of philosophical theories, each is based on another one.

He conducts impartial, dispassionate analysis of human action and avoided any teleology (the theory of active, purposeful leadership of higher power), he puts the world in boundaries of absolute necessity. Philosopher was addicted to systemization, and was good at this area. He reconsider philosophical ideas of Rene Descartes and developed the idea of continuity and diversity of all phenomena in the unity of one divine substance that has no free will in the common meaning of this concept.

Metaphysics of Spinoza  views  the primary principles of all being, the essence of the world, described in “Ethics”, where the author sought to formulate a definition of basic concepts, axioms, theorems by logical principle.

Theorem number 36 from third part of “Ethics” is formulated as follows: «The intellectual loveof the mind towards God is that veryloveof God whereby God loves himself, not in so far as he is infinite, but in so far as he can be explained through the essenceof thehuman mindregarded under the form of eternity; in other words, theintellectual loveof themindtowards God is part of the infinitelovewherewith God loves himself.»

The purpose of comprehending of being for this Netherlander was to achieve peace of mind, satisfaction and joy. He thought that to achieve these goals is possible only by understanding of human nature and his place in the universe. Furthermore it requires the study of the nature of reality.

Thus Spinoza comes to understanding life as infinite substance that causes everything and itself.

The concept of love Spinoza interpret as “, satisfaction reached by the idea of external reasons.” The feeling of love is mostly put up with high, theological meaning. The philosopher vision differs from these characteristics which roots in Holy Book.

He, after Descartes, who encourage to doubt everything in the name of truth, wants to start talking about God again, from scratch, so his own words gave cause for no doubt, because it would have the power of mathematical proofs. In unnecessary metaphor philosopher sees the temptation to turn the essence into emotional occasion, which in cause of arbitrary interpretation could distort the truth.

The feeling of satisfaction and awareness of the object that caused it – is the clearest and non-controversial in issues of love. This vision of love does not reduce the meaning of it, but shows the starting point of understanding, as it respond to human nature. This is how man was originally given to himself, as the only way of existence of the divine substance. That version of being wouldn’t be like this if a human beings was given with love of another nature.

Everything that is outside affective vision of love – human action, based on existing affective sense, but going far behind this base. Comprehending of God is also belong to human actions which cardinally change the meaning of love. Only then love is equal to the divine quintessence.

Before a person comes to an authentic cognitive action as the love of God, affective sense of satisfaction can be caused by any ideas of subjects. These ideas are imperfect, they are various and controversial, so affective love of them can bring to life the opposite to love and something destructive as hatred.

Justly “Desire” in one of Spinoza’s Dialogues convinces his companion – “Love” is that there are many substances, not one, and each deserves to be loved. But the third member of dialogue “Sense” strongly opposed this delusion and “Love” enters into an alliance with him, that did not seek to be keen, longing, but intellectual love.

But now is the only one worth intellectual love subject, and it’s God. Because he is the true and only substance. You cannot “miss in the loving og God, since he has no worthy competitors”. In a nutshell Spinoza described the concept of love through intellectual dialogue between Desire, Sense and Love, where love of many substances oppose to love of the true unity which is God.

Since God is infinite substance, perception of him is never-ending, thus the nature of infinity reach the intellectual love of God. Because of this love, infinity ultimate way of being human itself begins to achieve substantial characteristics due to involvement in the human soul to the divine attribute of thought. If the love of God is left non-intellectual, affective – it lacks the real meaning, without understanding the infinity of the divine – faith and this love is unstable, easily replaced by another affective something.

(It turns out that the direction of Spinoza to the intellect, not only is the rationalist reduction, but rather creates a single opportunity to come into contact with the divine reality in the form in which it is available to people at all. This direction to the intellect provide the love with status infinite, that is the love which person worthy of love God.)

Through the metaphysics of Spinoza, as well in minds, thanks to mathematical proofs become stronger and determined the concept which have a theological background of itself, although clearly different from traditional theological interpretations of the nature of God and divine love. Therefore, this kind of metaphysics can serve theology by creating these intelligent design, it brings a point of stability and certainty in science the word of God.

3 thoughts on “The Intellectual Love of God”