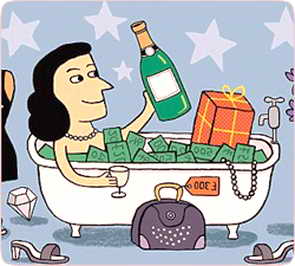 In everyday life we always come across with term “egoism”. So frequently, that wehave stopped to perceive something unusual here and often use this term not for its purpose, because everyone use this word, but the definition is too abstract.

The most vivid possible example is fascism. The idea, that Aryan race is the best and supreme, that’s why it should dominate and subdue the rest of the world, chase and exterminate nations for fun, that are inferior and not worth to exist side by side – Jews and Gypsies. Actually, as for Jews there is a special preconception, as the business of Jews-tradesmen successfully flourished in foreign for them Germany and that oppressed the rights of noble Germans. But that’s extremeness, so-called global egoism.

The problem of morality of occupation of the part of the foreign country is unfortunately an actual problem up to the present day.

The more ordinary, but not less vivid example one can notice in the almost 1 km line to the doctor in the hospital, where from time to time appears the cleverest that doesn’t care a damn about the rules of the line. Or according to the legend, in public transport a guy should offer his seat to a girl, not because she is a classmate or colleague, just because she is a woman, but no one does this. As statistics say, mainly girls offer their seats to grandmothers. The moral choice – how to do right, so-called Hamlet’s ‘‘to be or not to be’’ often dictates mercenary “I could, but better someone else do this’’.

The term ‘‘egoism’’ is reasonable to use when there is a predominance of own self-centered interests above the interests of other personalities- when a person literary ‘‘walkover somebody’’ to achieve his requirements and is able to do insidious things for obtaining his aims. Selfish people are not allotted by moral freedom, because moral freedom – is an ability to realize someone’s will without restriction of the will of other people.

Egoists contradict the golden rule of morality- ‘‘treat the other people as you wish to be treated by them’’. All means justify egoist’s aim, because this is His aim.

People usually ascribe to someone such a feature as egoism, but actively deny the availability of it in their own characters. It’s definitely better to look at the problem from side, but we need to go dipper: everyone knows that egoism is a bad feature, I’m a good person so I’m not an egoist. Primitive logic. One will always find justification for himself- ‘‘that’s just because some circumstances, everyone would act like me in this situation’’.

The origins of egoism lie in unconsciousness of our actions, a person just doesn’t realize that acts unfairly in relation to someone. The display- a person arranges with his own conscience and allows himself some actions. For example, the encroachment upon somebody’s property (but I returned, I liked this thing so much, I took that and anyone even notice), or a banal ‘‘why I should do this if someone can do this for me’’. Of course, I’m too lazy, it’s not difficult for him to do this and if he will do, that’s not a problem for him to do it for me as well. By the way, egoists that are strong in private life are usually manipulators.

All problems are from the childhood, the defects of upbringing promote the accrual of bad features in personality. The biggest perspectives to grow up being egoists have those children that are looked after too much by their parents. Parents are trying to safe their child from all problems, don’t allow him to do things on his own, even to pick toys.

Parents always praise their child, submit to all hysterics and tears, they don’t teach that everyone should share and do good things. Everything is done for their child, even the world turns around their son or daughter. Too much- isn’t good, children get used to excessive attention and begin to demand it from all people. When such a spoilt person gets into a new social environment, the necessity in attention isn’t satisfied and then appears a dissonance between expectations and reality. The person begins to blame people who don’t obey, instead of his overrated claims.

The working out of ability to take care of other people may correct the wrong laid model of behavior. It’s necessary to teach moral orientations, develop adequate self-appraisal and critic to own actions from the childhood. Moreover, an adult should be an example, his or her actions should meet his or her words.

A pronoun ‘‘I’’ is a provisional display of egoism. Every person in relation to themselves says: I want, I decide, I will have, I will do. That may be considered as egoism in a good way. A healthy egoism, extended to the normal level is inherent to every person. Moreover that’s an impulse for a full value development of personality. Conformism, a regular submission to alien impact, is another extremeness that affects personality.

Does it mean that all people are egoists? The question is controversial, but how paradoxical it may sound, the answer will be – yes, really all people.

So, egoism is a very widespread phenomenon and is inherent to everyone to the higher or lower extent, not every person is able to estimate themselves adequately. As Ekzuperi wrote: ‘‘Get up in the morning, wash up, put yourself in order and immediately put your planet in order’’ – that means put your inner world in order. Begin to exterminate your egoism and the world will change. And as a golden rule of ethics says- ‘‘Oneshouldtreatothersasonewouldlikeotherstotreatoneself’’.