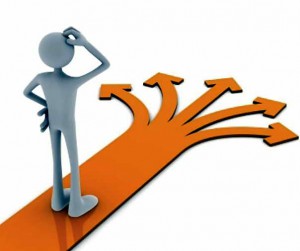 Each person do a choice, because it is an integral part of our life. Every day a person chooses something for example: people or friends for friendship, clothes, what to eat, social role that will be played today at work, in transport, at home, with friends …

Man`s nature is a conscious individual, so can make a free choice as appropriate to needs, values, desires, interests, but this choice should not contradict morality. So what exactly is morality, or moral choices and moral behavior?

Moral – individual human relationship based on the distinction of good and evil, human activity, human behavior in society, principles and rules which man is guided in his behavior, the inner world of human and conscience. Human cannot been encouraged against her own liberty, because person choose decisions on her own in different situations.

A person can make different choices for the good of society, or for personal gain, for evil or good, honestly or not, and be guided by the same issues as: What do i get?, or will I get some benefit ? Will i have something? And on the other hand can be guided by the following questions: What can I do for society? Whether it will be accepted by society? How can i help people doing it? Does somebody judge me?

So, every people`s choise is her own one and only that person is responsible for it, and only she knows if her behavior is good or not regarding to other people, was the decision positive or negative one.

Making moral choice is possible to go against personal principles, individual dignity and conscience for the benefit of society, it is necessary to care not only about themselves, but also about others, family, relatives, friends. And in general making a moral choice it is necessary to aspire to so-called golden mean that it was good not only itself, but also to other people, and also not to do itself harm in the benefit another.

But it isn’t always possible to understand that is the right and wrong moral choice, and for everyone wrong and correct it makes especially personal and individual sense. And it’s not always clear where it starts bad and ends well, after all, between good and bad is a very thin line. And even so, everyone decides where that edge and the line, and to cross through it or not. It is necessary to remember what exactly for each choice, people is responsible to himself and during all the life.

The moral behaviour is an understanding and ability of the personality, each person to live in society, among other people, to sort out with them the relations within ethical standards. Behaviour is the understanding of moral values that are accepted in society: justice, freedom, mutual good and it embodies the aspirations set of moral rights.

Together with moral behaviour exists immoral, based on injustice and hatred and destroys personality. The act is the basis of moral behaviour that carries both positive and negative. Human behaviour comes from various factors, among which are: motives, because they are many and they are doubtful; the consequences of actions; reality in which the act is carried out; means for receiving the purpose and goals.

Moral behaviour is constantly adjusted to the level of individual morality and spiritual aspiration is a system of rights and values. The main factors of moral behavior is the level of cultural development of the person, his strong-willed spirit and moral belief of the individual. So, the moral behavior characterizes life of the personality, and also her understanding about the good and evil, about justice, happiness, through its acts in usual life situations.

As for benefit and an economic benefit that is global problems of the present, after all benefit is in something profit, assignments. Economic benefit – potential opportunity, ability of receiving money. Unfortunately today, people are not always counted with morality, but rather looking for a profit, personal needs, they are more interested in personal gain, their interests and their achievements, they indifferent to others.

Each person himself has to comprehend and think of the moral principles, develop for himself certain rules. A person should decide for themselves and realize that it is good and evil, what it needs to see benefit. People have to conclude that the moral is that good and benefit to others, not themselves. Summing up, we note that everyone anyway operates and makes itself a moral choice throughout his life, and only it will decide be it moral or search some economic or other benefit in others.

2 thoughts on “Economic gain against moral behavior (What would you choose?)”