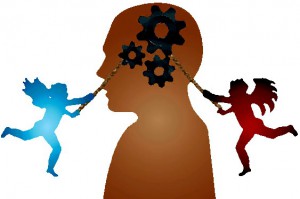 In modern world a lot of people have public institutions which they are manage for their own all life. Similar institutions, norms and principles are in etiquette, they are named moral values. From moral values depends our actions, attitudes and etc. In most case they are change human behavior and directly have an influence on personal freedom.

When social mature person do as opposed to morality, it call debt feeling, if she (person) doesn’t did – this debt will be change for feeling guilty. Conscience of humanity is connect with moral debt, it impose a high modal demands.
Our conscience as a judge and that is how morally educated man, so the referee rightly commits her remorse disturb and more. It is interesting that this issue was more relevant than in the past and in modern society.

Moreover, as fleeting world is changing, and with it the moral institutions of people. With conscience we can connect human selfishness in all its forms. Everyone more or less selfish by nature, it was formed for a long time as a reflex. According to the man was less selfish, it is necessary to educate accurately and with high moral guide. Personality should be less focused on themselves, their problems, at the same time helping others in various situations both mentally and physically. It’s a pity, but that fact that we are live in n 21st century, in revolutionary time, scientific discoveries and we forget the basic laws of human existence. We are afraid to be revealed to others stingy with emotions and feelings, ignoring the need to help others. Humanity is improving, but not in all its manifestations.

A lot of people think that it is better not to give much importance to moral qualities and norms, that without them easier to live, easier to take on decisions. If so everyone will think it perform against conscience, our society begins to degrade and lose humanity accounting humanity. No society is perfect, but looking at civilized countries, their spiritual and moral education at a high level. Unfortunately, in our country is seen less frequently.

Another of the decisive facts that affect the human mind, is wealth, their value, prestige, they are condescending and manage the impact of our consciousness and affect our conscience.

An important influence have social environment, mass media. As we face each day with different kinds of aggression, lack of understanding of each other, selfish attitude. Each day for us on TV, the Internet, newspapers dictate their social attitudes, which we wouldn’t want, but still listen, forgetting the moral aspect. The world has become more violent in its various manifestations: from the fighting until the basic human relationship to each other, compassion and empathy.

If the person is responsibility, open and has a deep sense of moral obligation – it is a conscientious man. Such a person poses a high moral requirements, improving, throughout life working on his negative qualities, sensitive, able to cope with emotional distress and help beloved in a difficult situation and for the other time. A conscientious man developed spiritual and moral world.

The disadvantage of modern society are needs in own moral self-improvement, for this reason depreciating own moral nature. Surround it looks like this: it is very shamed for some things, because it is condemned by my surroundings. But if to change the environment, nobody be ashamed of. For this reason, the priority of moral values changing with moral institutions.

In contrast, there are a large proportion of conscientious immoral, unscrupulous even marginal personalities. But they need to work on themselves, on their moral qualities. Self-discipline and self-development throughout life will help them in this.

Conscience takes a defensive function, it requires moral prohibitions comply, forcing the person to perform certain actions, no matter how seductive they are.

Conscience is necessary to form the childhood, because then not always in the adult world is a sense of awareness and responsibility to each other. It formed the moral and spiritual world with which it comes later in adult life and teaches others.

So there is no conscience in an empty area and will not disappear, it formed a fruitful process of moral personality. Thus progresses or degraded, depending on the objective and subjective reasons. In self-identity, which formed the spiritual and moral conscience clean environment before and before itself.