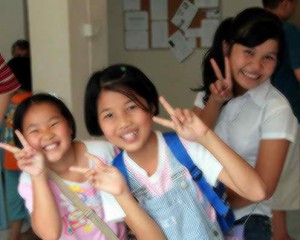 The social movement in Thailand that I am investigating is distinguished by the establishment of alternative education, foundations, and networks linked to socio-political and spiritual advocacies. This social movement views state educational reform/decentralization as an incoherent, hegemonic impulse and has countered it with the development of alternative schools and advocating home-school as an alternative to public schooling.

The growing numbers of alternative schools represent the resistance to perceived threats to deeply-imbedded cultural values posed by both decentralization and globalization. The state’s primary goals of decentralization are to redistribute the administration of the public good and to improve the quality of education in order to remain globally competitive.

Many Thais, however, need to be assured of adequate incentive to embrace the conditional empowerment of decentralization. To a large segment of Thai society, a reasoned resistance is necessary to deflect the intrusion of immoral cultural change caused by inadequate reform. The educational social movement represents this reasoned response and symbolizes many Thai’s lack of confidence in the state to deliver an equitable, coherent public good.

To answer my primary research questions, I will investigate three strains of educational reform: the alternative education movement, historical reforms related to globalization, culture, spirituality, and education; and the Ministry of Education’s reform policy-making. Theory My research will be informed by several theoretical frameworks, including: globalization and its relationship to decentralization, education policy-making related to reform in developing country contexts; culture as social movement; culture as education; communities of practice; and alternative conceptions of pedagogy and learning. Key literature will come from Western, Thai, and international resources.

This research represents a discourse expressing contributions in humanistic terms:

– Identifies historical relationships and inter-related affects between globalization and educational reform in Thailand.
– Provides explanations of how alternative education resists national/international hegemony and illustrates the political implications of democracy as a grassroots process starting with education.
– Examines home-schooling in Thailand as part of a social movement that conveys a perceptual change about how learning occurs, what it means to be educated, and the opportunities this affords.
– Examines some effects of western education on Thai “indigenous” learning patterns. – Proposes skills students need to learn to live in a globalized future-world.
– Reflects on Buddhism as a state tool and a means of resistance to the state;
– Defines spirituality and clarifies how it may influence educational reform and promote public good.