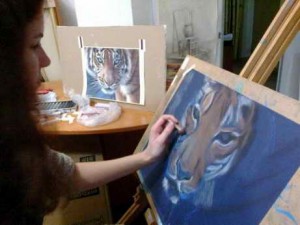 Education is a process of organizing purposefully an interaction between an educator and a pupil that influences the conscience, subconsciousness, perceptional and motivational sphere of a pupil, with a view to form a scientific conception of the world, high moral qualities, social and professional personal traits.

In my opinion, moral and aesthetic education is very important in the process of creating a personality. However,in order to understand their peculiarities, it is necessary to look into the unity and distinction of these processes.

Moral education is a purposeful system of creating a moral behaviour, feelings, and conscience. The basis of moral education is morality . Morality is a system of ideas, norms, rules, principles of behaviour and activities that regulate the humane relationship between people in any situation. Morality includes feelings, opinions, and relationship. Moral convictions are experienced and generalized moral principles and norms.

Moral feelings are enquiries, assessments, a direction of a spiritual growth of a personality. Moral habits are steady behavioural forms that become a need and are realized under certain circumstances. A moral direction is a steady position of a personality. There are the following essences of moral education :

– taking into consideration another person’s position and building up one’s own behaviour that is regulated by morality norms;
– creating a free personality;
– basing on intellect and emotions.

The main factor of moral education is a work , play, educational, and social activity. Any activity is characteristic of a moral meaning as a human has actual relationships with surrounding people and is under a social influence. The morality of these relationships shows itself in ways of behaviour.

One of the goals of moral education is forming moral feelings. In the process of activity children get complicated moral feelings, and perceptional and emotional experience. There is a unity with aesthetic education in this process. As moral consciousness is formed, a child learns such notions as politeness, friendliness, responsibility, patriotism, and friendship. Literary works help that.

A behaviour of literary characters and an assessment of their actions help develop moral notions and personal qualities. One can highlight a few stages of forming moral consciousness : practical mastery of behavioural norms; study of moral notions; using one’s knowledge in practice, behaviour, and communication. Relatively speaking, the content of moral education can be presented as education of a humane attitude to people, kindness, mercy, friendship, respect, a positive attitude to work , and love for nature.

Aesthetic education is a purposeful process of forming an ability to experience and assess beautiful things in various spheres of human activity. Its features are emotionality, intelligence, moment of assessment, and activity. A person’s feelings, imagination, memory, thinking and speaking take part in the process of apprehending art. The completeness and depth of aesthetic education depends on a development level of mental processes .

A broad knowledge of aesthetic things (literature, painting, theatre), educational work explaining their artistic value and aesthetic importance, excursions, extraclass work help to form artistic taste and aesthetic ideals. It is especially good to take children on an excursion which acquaints them with a world of things, nature, and people. As K.D.Ushynskiy once said: « Nature is the best educator».

It is a source of beautiful things, it makes people glad, it comforts them, and it inspires to achieve something new. A person’s attitude to nature is an indicator of his manners and morality. That is the thing that unites moral and aesthetic education.

Thus, regular aesthetic activities combined with conversations on something beautiful, countryside excursions, going to theatres or picture galleries contribute to both education of taste and feeling of something beautiful.
In my opinion, moral and aesthetic education have much in common. The aesthetic ideal is at the same time a criterion of morality.

The unity of beauty and morality greatly influences a person, his feelings, thoughts and behaviour. A level of a person’s moral development determines his goals and attitude in life, and spiritual values. Moral convictions influence a personality’s taste and needs.

At the same time, when a person gets to know beautiful things, acquaints himself with a world of things, nature, works of art, then morality is formed. While apprehending something beautiful, a person begins to look into the essence of these things more deeply, to comprehend them and on this basis he gets a moral direction and consciousness. Thus, one cannot distinguish between such notions as aesthetic and moral education, as they are the basis that helps a person to become a personality.

1 thought on “Moral and Aesthetic Education”