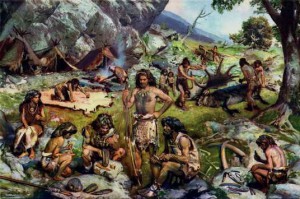 Syncretism is the oldest principle characterized by a certain attitude of man to the world, to himself, to reproductive activity. From the Latin, “syncretism” translated as “societies association” means a union of incompatible beliefs and thinking indicates a coherence and unity. The term syncretism applied to many areas of life, including the historical development of mankind. Active explore of this concept and phenomenon began relatively recently, in the XIX century, and therefore its essence, perhaps has not fully disclosed yet. From the beginning, there is the original concept of syncretism, which and will be discussed below.

I am going to start with the fact that primitive society – is the initial epoch in the history of mankind. It is the longest of all and it is called prehistoric age, because at that time was not opened the writing and in general, this period is characterized by the fact that people lived in communities, work all together owned the land, worked on it, treated and distributed all taken by their own labor together evenly. The main relations of primitive society, were related, and the account of the relationship conducted through the maternal line.That’s why, the period of time referred to matriarchy. All the families were linked and dependent on each other by marital bonds.

Several families together were the tribe. Because of this the initial order, also called tribal. Also, you probably have heard the name of this period as prestate,because states did not exist at that time. Although once appeared certain community, of course, there was the need for the government, because how can the society exist that does not have power? The life without power led to the fold of the community. The so-called leadership of the society had those who enjoyed the authority among others, were usually they were the elders and leaders. Their orders were to be performed by all.

Big problems that encountered, decided on the Meeting of the tribe. Although the times are not usually characterized by different problems between people, because everyone did not consider themselves as individual personalities that have certain rights and responsibilities. People complement each other to have certain benefits, they understood themselves as a necessary part of the society, and knew that if someone does not perform, for example he rule he will cross up others because of his action.

The original individual, although it was ruled by social groups, did not loose his own personality. Everybody had the right to their opinion, but usually such protests ended in failure. The dominion was certainly the team.

Syncretism was manifested in primitive society, and therefore were there no division of labor, there were no specialists in certain types of work, all people should be able to do all that is necessary for survival, for life. Also that people of that time did not dissociate then self from nature, they considered themselves one with the environment, the part of a larger universe.

As written in many sources, the syncretism is the basis of the first attempts to explain the origin of the world. The world for primitive people, complate and uniform, and everything in it is seen simply as individual families, groups, people that had another excellent inherent person look . Everything in the world has a soul, its own language, opinion, everything communicates and interacts with each other. The explanation of this phenomenon is engaged in this outlook as animism.

Also due to the syncretism of primitive society can be explain the origin of such ideologies as totemic, fetishism, magic, and others. All those types of worldviews occurred in the prehistoric era. These outlooks contributed to the myths and mythology, symbols, rituals and taboos. Taboo is the prohibition to do something, to live in a certain way. Taboos and rituals expressed the mentality. Of that time some time later, due to the above things occurs first figurative art. People were trying to portray, their lives, their norms, standards in their own made things used in future such as decoration for the home, nowadays it is the that sights help us to understand and learn more about that time.

Despite the fact that primitive society was the first in the development, it established certain social rules, norms of the behavior and life. This it evolved historically and gradually solidified. At the time standards sometimes called fixed customs, traditions, ceremonies, rituals and taboos. These rules and regulations usually followed voluntarily: some did so because others did it, someone because he was so convenient, someone saw the benefit of this, some just by the habit. But despite of the voluntarily of the rules, a person that did not execute it could simply drive out from the community, and at that time it was pretty bad because people did not live long outside the community, because of the constant threat to their lives.

To conclude we can say that for the modern humans are the knowledge about these early years, is important because at that time everything started to develop. This provides an opportunity to learn more about our roots and understand what made the basis of our development. In my opinion, understanding that all that was, is and will be interconnected on a subconscious level makes us closer to each other, humane conscious. The syncretism is the core of the knowledge that all people on the planet, is very similar by their habits, traditions, mentality, social life. All this, in fact, unites us and not divides, as many think. Only through this we have integrity.