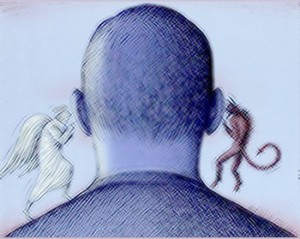 So, morals consist of rules which regulate people’s behavior. Moral self-determination it is a process which doesn’t have any period of time, but it helps to find a way in life, it’s a growth of person’s moral culture. Is everybody a personality? Is there a difference between a nation such as a person, individual and individuality?

G. Allport has counted about 50 definitions of personality. He has taken them from philosophy, psychology and sociology. It was in 1937. The science is still developing and getting more and more definitions.

A person is regarded from biological and sociological points. A.M. Leontiev has given us the most definite description of a person. He described it as a person and an individuality.

The individuality differs from other, it consists of some features and all together they help to create some skills, ideals, knowledge. Sometimes the individuality may be in appearance (the colours of eyes, hair, the statue and so on), but other understand the inner features (life values, the meaning of life and so on).

Let’s analyse, what is moral and what it consists of. It is known since ancient times, that moral id rules by two definitions: a good thing and an evil. Moral is the result of understanding them.

People have been always at the crossroads: one way is goodness and another way is an evil. Every person walks by this crossroads. Somebody chooses goodness, other choose evil things. Some people are standing in the middle and turn according the situation, but each this turning leave some results which can’t be hidden.

Let’s discuss each way (road): the first goodness road is very complicated, you need to overcome many obstacles on your way to get your goal and to get a reward for all your efforts and sufferings. Some people are afraid of the road, and a very few people chooses it. The second road, an evil way is easy. You don’t need too many efforts to get a great success, but it is not right way.

Each person understand these two definitions and he(she) make his(her) own choice. Also we can say that a person may choose moral or immoral way. If you look at it in our modern world, you can see that they make inner contrasts of person’s desires. For example, a person has his(her) own desires and ideals, but he can’t fulfill them because they don’t coincide with the society’s moral principles. A person is selfish by his(her) nature, because everything he(she) does is for his(her) benefit. It’s impossible to call it an evil, because he(she) doesn’t understand it. In general the understanding of a person his(her) deeds, doesn’t have an evil direction, but if they are planned against deeds of other people, so it becomes an evil. It has a negative influence at other people and at the person who had done it.

A person can’t avoid evil in his(her) life. To become a personality you should know about goodness and evil. The experience helps to avoid serious conflicts. Many people say that a childhood is a period without sins. They explain that a child may do something that can be named an evil, but the child doesn’t know, what is good and what is bad, he(she) can’t analyse the results of his(her) activity, all this must be explained to the child during the educational process. When a child is growing up, he(she) is surrounded by many people and they influence on him(her).

Some people don’t see the difference between a goodness and an evil. It may cause the conflicts. When a person begins to think about the reasons of the person’s action, he or she sees the moral problems. It makes clear, that a person should overcome such two periods in his(her) life. The first period is misunderstanding of goodness and evil, and the second period comes when person can recognize where is good and where is evil. To make a good choose a person should understand if very well.

We can say that every person has his(her) way of understanding it and somebody tries to broaden his(her) moral experience, thinking about behaviour. Somebody may make only one conclusion and don’t think about moral-ethic problems and in future his(her) may not consider them very seriously. Some other people think, that they should consider them it all, because they need to live and to get some success. Also there are some immoral people, they don’t think about them at all. So, everybody acts by his(her) own way.

So, we can say, if we don’t have any evil in our life, we will not be able to understand a real moral goodness.

They are two sides of one coin. They are inseparable and connected together, but in doesn’t mean that we have always look for evil, because it is near (not for from) us and it helps us to see and to understand the goodness. A person has always a choice how to act at some situation.

So having analysed everything we had told before, we can make a conclusion. A moral self-determination of a person is his(her) ability to choose his(her) own way. We know, that become personality you have to work hard and to overcome many obstacles and you shouldn’t forget that there are two inseparable things such as a “goodness” and ” an evil”. They help us to choose our own way. Having the evil’s experience we are getting stronger in our future life and activity. This knowledge helps us to adopt “evil” to analyse our deeds, and to make our chose. The “evil” experience is important because it shows us, that there is plenty of goodness in the world and everything we are making depends from us.